The story of Two Beers Brewing Company (CBM Sponsor) is one I’ve been following for a long time.  I can still remember when the taproom had just a few stools and couldn’t hold more than a few people.  Today, Two Beers Brewing Company – along with their sister companies, Seattle Cider Company and Sound Seltzer Company – boasts a huge, inviting taproom with 24 taps of beer, cider and seltzer (plus a cider slushie machine), pub games (billiards, foosball, darts, shuffleboard, etc.), a beautiful patio and a food service window run by the folks from Bread And Circuses.

There was some concern in the local craft beer community when, back in 2016, Two Beers Brewing Company and Seattle Cider Company were acquired by the Agrial Group, a leading French agri-business cooperative. Since that acquisition, however, I haven’t noticed any drop in the quality of their products, and they’ve even started expanding their portfolio – releasing lots of new beers this year including what I think may have been their best IPA yet, What A Time To Be Alive hazy fresh hop IPA.  Now Two Beers is prepared to celebrate their 11th Anniversary with another new release: This Goes to 11 Birthday Cake IPA.

END_OF_DOCUMENT_TOKEN_TO_BE_REPLACED

Two Beers Brewing Company (CBM Sponsor) has had quite the journey.  They started off back in 2007, brewing just 100 barrels per year and, since then, they’ve never stopped growing.  Year after year, Two Beers has just kept on expanding.  They’ve updated and upgraded their taproom, The Woods, several times since 2007 and, back in 2013, they announced the launch of their wildly successful sister company: Seattle Cider Company.

Then just two years ago in 2016, Two Beer announced that they had been acquired by Agrial Group, a leading French agri-business cooperative.  Since that acquisition, however, not much has changed.  Now comes the first big announcement since that acquisition.  Two Beers Brewing Company is pleased to announce the launch of their newest sister company: Sound Craft Seltzer Co.

END_OF_DOCUMENT_TOKEN_TO_BE_REPLACED

I’ve been following Two Beers Brewing Company (CBM Sponsor) almost since they first opened and I think the first beer I ever had from them was their flagship EVO (Evolutionary) IPA.  Loaded with Simcoe (one of my favorites), Amarillo and Centennial hops from the Yakima Valley, then dry-hopped with more Simcoe and Columbus, EVO is still a solid IPA.

However, ever since Two Beers came out with more IPAs like their Wonderland Trail Double IPA, Mango Passionfruit IPA and new The Other Coast Hazy IPA, EVO doesn’t get quite as much attention as it used to.  Two Beers has noticed this so they’ve decided to shake things up a bit and turn EVO into an IPA that will be constantly changing throughout 2018, utilizing new, experimental hop varieties from Yakima Valley. It seems quite fitting that a beer named ‘evolutionary’ is now evolving.

END_OF_DOCUMENT_TOKEN_TO_BE_REPLACED

Many of the commercial ciders on the market today tend to be too sweet for my palate.  Measured on a scale called Brix, many of those ciders come in at a Brix rating of 4, 5 or even higher.  I think that’s why I enjoy so many of the ciders from Seattle Cider Company.  They keep their ciders low on the Brix scale, which means they aren’t as cloyingly sweet.  Their Dry cider, for example, is 0 (zero) Brix and their Semi-Sweet cider clocks in at just 2.6 Brix.

If you’re also a fan of ciders that stay a bit more on the dry side, then you’ll be excited to learn that Seattle Cider Company is ready to bring back their Spring Seasonal: Basil Mint Cider.  Coming in at 6.9 ABV and just 1.8 Brix, this Spring Seasonal starts off with a base of 100 percent fresh pressed Washington apples, accompanied by 100 pounds of fresh basil and 100 pounds of fresh mint.  Muddled on site, the basil and mint are then added directly to the cider during fermentation, providing savory and floral characteristics and a clean finish.

END_OF_DOCUMENT_TOKEN_TO_BE_REPLACED 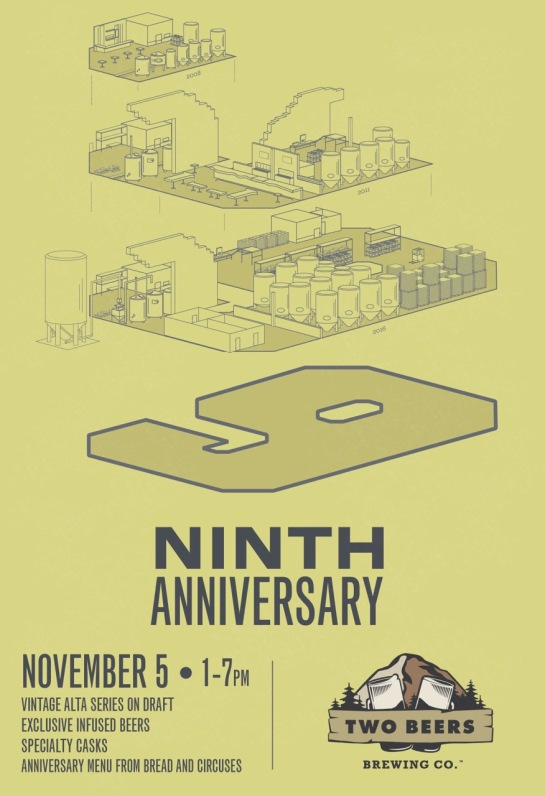 END_OF_DOCUMENT_TOKEN_TO_BE_REPLACED

We’ve seen our share of ‘buyouts’ in the craft beer World.  You know the feeling – that heartbreaking moment when you realize that one of your favorite craft breweries has ‘sold out’ to the big boys: InBev or SABMiller.  This is NOT one of those moments.

Two Beers Brewing Company (CBM Sponsor) and Seattle Cider Company, the first cidery in Seattle since the days of prohibition, are pleased to announce that they have formed a partnership with French, farmer-run cooperative Agrial.  They’ve struck a great deal that allows for additional expansion of both Two Beers Brewing and Seattle Cider, without giving up any control.  Both brands will continue to operate completely independently, right here in Seattle.

END_OF_DOCUMENT_TOKEN_TO_BE_REPLACED

It seems like only yesterday I was telling you about the launch of Seattle Cider Company, sister company to Two Beers Brewing Company (CBM Sponsor) and the first cidery in Seattle since prohibition.  In reality, that was almost three years ago.  Since then, Seattle Cider has come out with several new ciders, ramped up production multiple times and increased distribution to over 12 states (including Washington), with more states being added all the time.

Now, nearly three years later and bigger than they ever thought they’d be at this point, Seattle Cider Company is preparing to celebrate their 3rd Anniversary next Saturday, August 27th at The Woods taproom.

END_OF_DOCUMENT_TOKEN_TO_BE_REPLACED 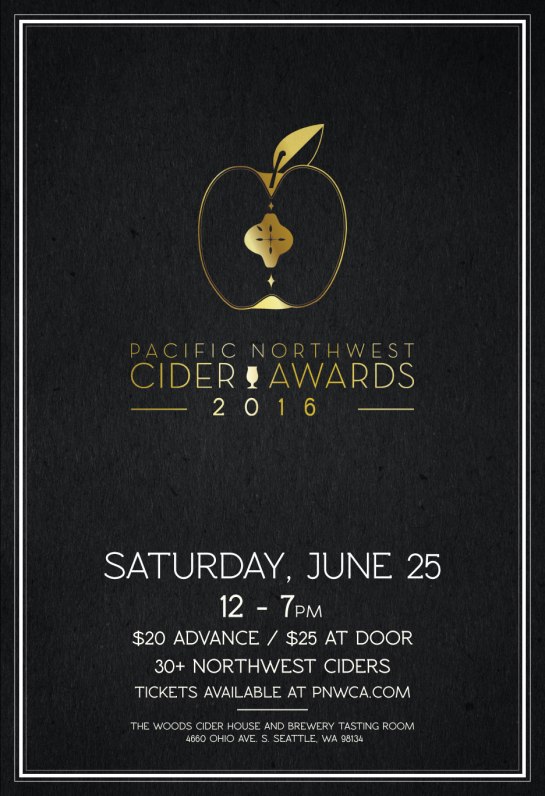 Back in 2014, I told you about the first annual Pacific Northwest Cider Awards (PNWCA), hosted at Seattle Cider Company‘s taproom: The Woods.  It was a great success and returned for its 2nd year in June 2015.  Now, here we are in June of 2016 and the PNWCA is returning for it’s third and biggest year yet.

“Growing every year, the Pacific Northwest Cider Awards has received more than 180 cider entries in 15 categories from 44 cideries found in Washington, Oregon, Idaho, Montana, and British Columbia. PNWCA raises awareness for the unique ciders being produced throughout the region while offering an easy way for the public to explore the world of cider.”

END_OF_DOCUMENT_TOKEN_TO_BE_REPLACED

Canning is all the rage these days and, with Summer just about here, you’ll be wanting to grab some of your favorite beers and ciders in cans to take along on your hike, camping trip, bike ride, etc.  Well, Seattle Cider Company is ready to give you even more options on what cans you can bring along with you.  Starting today, June 3rd, Seattle Cider is releasing their popular Summer Seasonal Berry Cider in 16-ounce cans.

According to Seattle Cider Company: “Made with Pacific Northwest blackberries, raspberries and blueberries, Berry offers a 6.9 percent ABV and just 1.8 Brix, falling perfectly between Dry and Semi Sweet in sweetness. It’s deep pink color lends way to a softly tart start with a flavor of young raspberries, followed by a subtly sweet finish.”

END_OF_DOCUMENT_TOKEN_TO_BE_REPLACED

Today, Monday May 16th, is day number 5 of Seattle Beer Week #8, which means we’re about halfway through.  Things kicked off last Thursday at Reuben’s Brews with the official tapping of the first keg of the official Seattle Beer Week beer: Daily Pale, followed by the opening night pub crawl.  I had to drop by Reuben’s, of course, for the kickoff and then found my way to Beveridge Place Pub for stop #3 on the crawl.

Since then, the events have been coming pretty much non-stop.  The highlights for me so far have been the Underberg Back In Black Stout Fest at Brouwer’s Cafe, Satanic Metal C.O.W. Night at Toronado and, even though I had to leave a bit early, Firestone Walker & Holy Mountain last night at The Pine Box.