Do you have a favorite craft brewery?  I get asked this question quite a bit, but I’ve found it virtually impossible to pick just one brewery as my overall favorite.  I have a whole list of favorites (as well as a list of breweries I tend to dislike/avoid), but narrowing it down to just one?  Nope.  I can’t do it.

If you follow me on Twitter, then you know that I regularly post a list of some of my favorite breweries (on ‘Follow Friday’) but, again, it’s a list rather than just one brewery.  Each time I post my list of favorites, however, Reuben’s Brews is included.  Ever since they first launched back in 2012, I’ve been a fan.  Their Rye beers and barrel aged stouts are always excellent and they’ve just been killing it lately with all of their different IPA releases.

END_OF_DOCUMENT_TOKEN_TO_BE_REPLACED 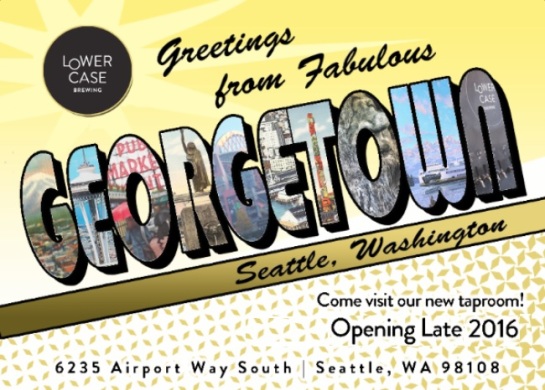 Last September, Lowercase Brewing Company was one of many breweries I mentioned in a Craft Beer Monger feature article about Great Reasons To Check Out Seattle’s South End Breweries.  They’ve been operating out of a space in Seattle’s South Park neighborhood since January 2014, but in early 2016 Lowercase found out they would have to close their taproom in South Park, so they started looking for a new location, and they found one in Georgetown.

Since then, they’ve been working hard to get the new Georgetown taproom ready for business.  Some initial permitting delays pushed back their original opening date but now they’re ready for their big reveal.  Lowercase Brewing is pleased to announced that the grand opening for their new taproom, on Airport Way in Georgetown, will be next Friday, November 11th starting at 4 pm.

END_OF_DOCUMENT_TOKEN_TO_BE_REPLACED

Seattle’s Ballard neighborhood gets a lot of attention for the number of breweries in such a small area, and rightly so.  Ballard has, to many, become known as Seattle’s ‘Brewery District’.  The South End however, if you include SoDo, Georgetown and South Park, actually rivals Ballard in the number of available breweries to visit.  There’s even more if you include the Columbia City area of Rainier Avenue South.

END_OF_DOCUMENT_TOKEN_TO_BE_REPLACED

Like most young Americans, my early experiences with beer back in the early to mid 80’s included choices like Budweiser, Michelob, Coors and other, similar, mass-produced American lagers.  In the ignorance of my youth, and with the complicity of my father who kept his fridge stocked with beers like Coors, MGD and *shudder* Meister Brau,  I thought, sadly, that these were the very best beers American brewers had to offer.

It wasn’t until a few years later, when I started buying my own beer (rather than raiding my father’s fridge), that I began to discover craft beer and started drinking beer from some of Northern California’s early craft brewing pioneers like Sierra Nevada, Mendocino Brewing, Anderson Valley Brewing, North Coast Brewing, Marin Brewing and others. (Sadly, I recently learned that Mendocino Brewing is no longer a craft brewery.  They are now over 70% owned by United Brewery Holdings, the Indian conglomerate Kingfisher beer.)