If there’s two things Seattle area breweries do well, besides brewing great craft beers of course, it’s collaboration and doing what they can to benefit worthwhile charitable causes.  That’s what Beer Church is all about.

END_OF_DOCUMENT_TOKEN_TO_BE_REPLACED

My craft beer World was rocked recently by the news that Firestone Walker Brewing Company was going to be retiring their Proprietor’s Reserve Series of beers, which includes one of my all time favorite IPAs: Double Jack.  As dismayed as I was by the news, the announcement actually follows a trend that seems to be taking hold in the craft beer World.  Perhaps you’ve heard the term being thrown around out there: The death of the flagship.

It seems, if you want to remain popular and buzz-worthy in today’s craft beer World, you can’t just rest on your brewing laurels.  The breweries that are garnering the most attention and publicity are those who are constantly coming out with something new.  Well, if you want to brew something new, that means you often have to stop brewing something old.

END_OF_DOCUMENT_TOKEN_TO_BE_REPLACED

There are lots of great craft breweries in the Seattle area, and many of those breweries were founded by people who started off as homebrewers before making the leap to professional brewer.  Adam Robbings, founder of Reuben’s Brews is one of them.

As a call back to Adam’s homebrewing roots, Reuben’s Brews has announced a homebrew competition as a means to help inspire other homebrewers to chase their own brewery dreams.  The winner will receive a cash prize but, more importantly, will brew their winning homebrew with the crew at Reuben’s Brews and see their beer on tap at Reuben’s and in limited distribution around the Northwest.  So fire up those brewing kettles and bring out your very best homebrew recipes, because (in my best Ryan Seacrest immitation) this… is Hop Idol!

END_OF_DOCUMENT_TOKEN_TO_BE_REPLACED 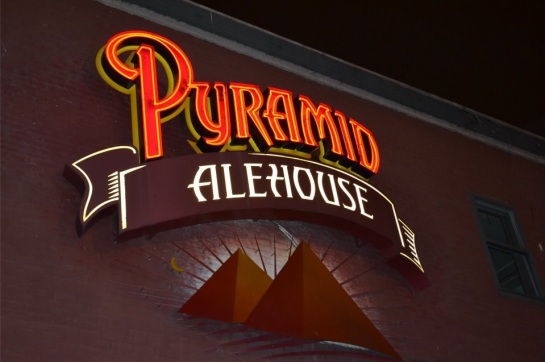 Pyramid Brewing Company has been around for quite a while.  They began as Hart Brewing way back in 1984 and have been through several small changes, including changes in ownership, since then.  While their main brewing operation today is in Portland, they continue to produce beer at their Seattle brewery location on 1st Avenue South, right across from Safeco Field. Pyramid produces a number of different Ales, including their popular Winter Warmer, Snow Cap.

It’s amazing to think that Pyramid has been producing Snow Cap for 30 years now.  That’s longer than some of you reading this have even been alive.  Now, Pyramid is preparing three special releases in celebration of the 30th Anniversary of Snow Cap.

END_OF_DOCUMENT_TOKEN_TO_BE_REPLACED

Winter doesn’t officially start until December 21st, but with our continued rain and lower temperatures, it almost feels like it’s here already.  Chainline Brewing Company doesn’t mind though.  In fact they’re all set to welcome Winter early this year and are even throwing  a party to mark the occasion.

END_OF_DOCUMENT_TOKEN_TO_BE_REPLACED

Last September, Lowercase Brewing Company was one of many breweries I mentioned in a Craft Beer Monger feature article about Great Reasons To Check Out Seattle’s South End Breweries.  They’ve been operating out of a space in Seattle’s South Park neighborhood since January 2014, but in early 2016 Lowercase found out they would have to close their taproom in South Park, so they started looking for a new location, and they found one in Georgetown.

Since then, they’ve been working hard to get the new Georgetown taproom ready for business.  Some initial permitting delays pushed back their original opening date but now they’re ready for their big reveal.  Lowercase Brewing is pleased to announced that the grand opening for their new taproom, on Airport Way in Georgetown, will be next Friday, November 11th starting at 4 pm.

END_OF_DOCUMENT_TOKEN_TO_BE_REPLACED

I love this time of year.  I may be a serious hophead (I’ve been in hop-lovers Heaven this fresh-hop Season), but I think most of my favorite craft beers are still dark beers.  When Stout, Porter and Winter Lager season rolls back around, you’ll always find me with a big smile on my face.

Well, Black Raven Brewing Company (CBM Sponsor) is helping me out with that Winter beer smile.  Just two weeks ago they released Grandfather Raven Imperial Stout.  Last week they brought us Frost Beak Winter Lager and now, set for release this coming Saturday the 5th, is their Gunpowder Plot Nitro Porter.  Brewed to commemorate Guy Fawkes Day, Gunpowder Plot is rich and complex.  Brewed with bourbon-soaked coffee beans and cocoa nibs and served on Nitro, its a true pleasure to the palate.

END_OF_DOCUMENT_TOKEN_TO_BE_REPLACED 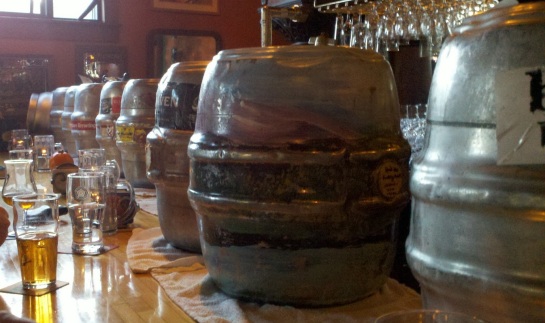 One month ago, on September 29th, Beveridge Place Pub in West Seattle (one of Seattle’s best local craft beer bars) kicked off their annual ‘Hoptoberfest’.  More than just a celebration of Washington-brewed IPAs, this month-long festival is their way of selecting their House IPA for the next year.

If you’re a regular at Beveridge Place Pub, then you know how this works.  For the uninitiated, Beveridge Place whittles down over 48 Washington IPAs to just 3 finalists based on your votes. Today and tomorrow is your last chance to vote on those 3 finalists, which must be done by blind ballot.  Order a taster try with all 3, and vote for your favorite without knowing which is which.  This year’s 3 finalists are: Reuben’s Brews‘ Crikey IPA, Georgetown Brewing‘s Bodhizafa IPA and Counterbalance Brewing IPA.  Visit Beveridge Place Pub today or tomorrow to have your blind tray and cast your vote.  I’ve already voted once, but I’ll probably go back and cast one more vote before the end of tomorrow.

END_OF_DOCUMENT_TOKEN_TO_BE_REPLACED

One such Winter time beer that I’ve had before and really enjoyed is making its return.  This coming Saturday, October 29th, Black Raven Brewing Company (CBM Sponsor) is releasing their Frost Beak Winter Lager.