Many of you probably know about Yonder Cider. However, if you haven’t been following the news you may not be aware that Yonder Cider was recently forced to close their carry-out taproom in Seattle’s Greenwood neighborhood due to a series of (in my opinion, unfounded) complaints form ONE anonymous and apparently disgruntled neighbor. It was sad and, frankly, maddening to see the city allow a single person’s unverified complaints to shut down a struggling small business with their bogus claims.

Thanks to a new partnership with Bale Breaker Brewing Company, however, Yonder will be back with a vengeance. That’s because Bale Breaker & Yonder have just announced that they will be opening a joint taproom in Seattle’s Ballard neighborhood by this Summer. They will be moving into the space formerly occupied by the now closed Populuxe Brewing Company (RIP, Populuxe).

END_OF_DOCUMENT_TOKEN_TO_BE_REPLACED

Two Beers Brewing Company (CBM Sponsor) has had quite the journey.  They started off back in 2007, brewing just 100 barrels per year and, since then, they’ve never stopped growing.  Year after year, Two Beers has just kept on expanding.  They’ve updated and upgraded their taproom, The Woods, several times since 2007 and, back in 2013, they announced the launch of their wildly successful sister company: Seattle Cider Company.

Then just two years ago in 2016, Two Beer announced that they had been acquired by Agrial Group, a leading French agri-business cooperative.  Since that acquisition, however, not much has changed.  Now comes the first big announcement since that acquisition.  Two Beers Brewing Company is pleased to announce the launch of their newest sister company: Sound Craft Seltzer Co.

END_OF_DOCUMENT_TOKEN_TO_BE_REPLACED

Even though I’m a big fan of craft beers, I do enjoy the occasional craft cider as well.  I sometimes head to one of my local watering holes fully intending to sample some ciders, but then I look at the tap list and I’m like, “Oh look! Three new craft beers I haven’t tried yet!”  As a result, I’m far less experienced and knowledgeable about craft ciders than I am craft beers.

Despite this inherent bias I have towards beer over cider, however, I definitely still appreciate a well made craft cider and usually do manage to try a few when I see something new and interesting.  So I’m a intrigued by the arrival of Louis Raison French Cidre, France’s #1 selling cider, which is set to make their U.S. debut this week.  There are five events happening around Seattle between August 15th and August 26th, where you’ll be able to sample their ciders and see what you think.

END_OF_DOCUMENT_TOKEN_TO_BE_REPLACED

It seems like only yesterday I was telling you about the launch of Seattle Cider Company, sister company to Two Beers Brewing Company (CBM Sponsor) and the first cidery in Seattle since prohibition.  In reality, that was almost three years ago.  Since then, Seattle Cider has come out with several new ciders, ramped up production multiple times and increased distribution to over 12 states (including Washington), with more states being added all the time.

Now, nearly three years later and bigger than they ever thought they’d be at this point, Seattle Cider Company is preparing to celebrate their 3rd Anniversary next Saturday, August 27th at The Woods taproom.

END_OF_DOCUMENT_TOKEN_TO_BE_REPLACED

It’s been nearly 2 years since Seattle Cider Company started producing cider as the first cidery within Seattle City limits since the days of prohibition.  It’s amazing to think, in that short time, how many new ciders they’ve introduced and how far they’ve expanded.  Since first launching on August 24, 2013, Seattle Cider has more than tripled their production capacity to 23,000 barrels and expanded into over 10 states across the U.S., with expansion to over 45,000 barrels and even more states coming soon.

Now, as their popularity continues to grow and they continue to expand, Seattle Cider Company is set to celebrate their 2nd Anniversary one week from tomorrow, on Saturday, August 29th.

END_OF_DOCUMENT_TOKEN_TO_BE_REPLACED 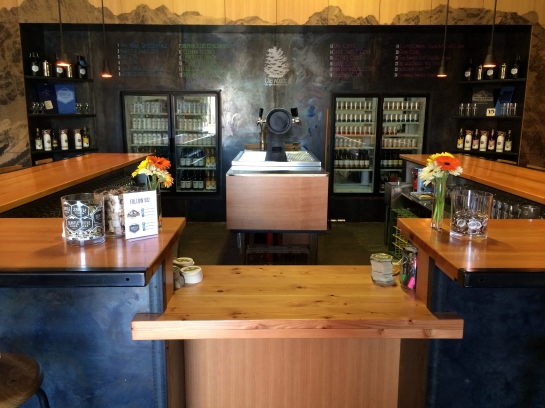 It takes a lot of courage, dedication and countless hours of hard work to turn a dream into reality.  Two Beers Brewing Company (CBM Sponsor) and Seattle Cider Company founder, Joel VandenBrink, found the courage to follow his dream way back in 2007 and, this week, the next part of that dream comes alive.

Two Beers’ first tiny tasting room opened in 2009 at their current location on Ohio Avenue South.  With just 6 seats at the bar and four beers on tap, it wasn’t long before it was clear that an expansion was needed.  So, in late 2011, Two Beers Brewing opened The Woods 2.0 (the first version of the taproom to officially sport ‘The Woods’ moniker).  The new, larger space featured more taps, a 45 foot reclaimed wood bar top and a ‘woodsy’ tree line painted on the walls.

END_OF_DOCUMENT_TOKEN_TO_BE_REPLACED

Most breweries start out small.  Two Beers Brewing Company (CBM Sponsor), for example, started in a space of just 400 square feet.  Now, after a few modest expansions and the addition of their wildly successful sister company, Seattle Cider Company, two years ago, Two Beers is ready to expand once again.

Set for next Saturday, June 13th, is the grand opening of The Woods, the shared tasting room for Two Beers Brewing and Seattle Cider.  More the doubling the size of their current tasting room, The Woods will be 2,800 square feet of awesome.

I was going to try and describe what’s in store for you, as I’ve had a bit of a sneak peek, but I don’t think I could describe it better than they’ve done themselves: “The Woods embodies its name with custom wood and ironwork throughout. Offering an expanded 24 taps and seating for 99 people, the new tasting room will also feature a range of bar games, including pool, darts, foseball and shuffleboard. Additional features include a raised dining area (available for private events), space for projection movies, a dedicated retail space and in-house kitchen coming this fall, run by the folks at Bread & Circuses. Outside, a permanent arbor will hold seating for 68 people.”

END_OF_DOCUMENT_TOKEN_TO_BE_REPLACED

Seattle Cider Company seems to be quickly taking over the nation.  Since they first launched back in 2012, they’ve continued to increase production and expand into new markets.  Just this past February I told you about their expansion into Wisconsin (the 6th state, including Washington, to carry Seattle Cider Company ciders).  Their ‘drier’, less-sweet ciders hold a growing appeal to those who find many other commercial ciders too sweet.

Now, Seattle Cider Company is set to expand into their 7th state: Minnesota.  Their ciders should start appearing there on May 4th, along with a series of kickoff events planed throughout the week.