I wasn’t always a fan of Sour Ales.  They weren’t a big thing when I first got into craft beer back in the 80’s but, since first discovering them several years ago, I can’t get enough. Super sour or just mildly tart, fruited or not, I’ve come to appreciate a wide variety of Sour Ales.

They weren’t the first Sour Ales I’ve ever had, but I’ve enjoyed just about every sour offering from Firestone Walker Brewing Company‘s Barrelworks series. Each year they keep expanding their wild/sour portfolio and this year is no exception.  Say hello to the newest offering from Barrelworks: Bretta Tangerine.  Brewed with Murcott tangerines, Bretta Tangerine is the latest beer to build on Barrelworks’ signature Bretta Weisse base beer.

Buellton, CA: Firestone Walker’s Barrelworks is back with another wild child—Bretta Tangerine, an inaugural hybrid beer made with 1,000 pounds of specially selected Murcott tangerines grown in the nearby coastal valley of Ojai.

“We sampled a bunch of different tangerine varieties before settling on the Murcott,” said Barrelworks’ Master Blender Jim Crooks. “The aroma coming off the zest was so pungent, bright, and in your face. We knew that it was going to make this beer pop.”

The inaugural release of Bretta Tangerine is rolling out this week to all Firestone Walker markets in limited draft and 375-ml bottle formats. It is the first of four bottled Barrelworks wild ale releases slated for 2019.

Bretta Tangerine is the latest offering built upon Barrelworks’ signature Bretta Weisse base beer. “Bretta Weisse is this classic Berliner Weisse-inspired wheat beer, and it provides this beautiful, citrusy canvas for creating a range of fruited wild beers,” Crooks said. “We’d done raspberries and black currants, and now it was time to explore tangerines.”

Bretta Tangerine officially began when Crooks and his crew sampled seven different tangerine varieties from Friend’s Ranches in Ojai. After they zeroed in on the Murcott variety, Friend’s Ranches shipped the tangerines up the coast to Barrelworks, where they were juiced, pulped and zested.“We created this thick, pulpy mass using nearly 90 percent of the volume of the 1,000 pounds of tangerines,” Crooks said. “The aromas coming off of it made our heads spin.”

The result is a uniquely juicy and delectable wild beer, loaded with vibrant tangerine goodness.

“The Murcott tangerines are the star of this show,” Crooks said. “They jump out of the glass with this spicy pungency that really sets this beer apart.” 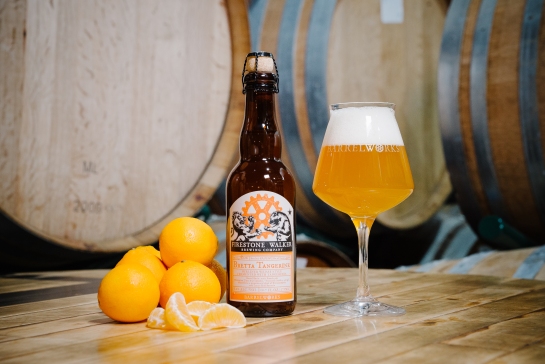 If you’re a fan of Sour Ales but have never tried any of Firestone Walker’s Barrelworks series of beers, you’re definitely missing out.  With flavors ranging anywhere form the classic Gueuze (Sour Opal), to a wide variety of fruited sours, everyone should be able to find something they’ll enjoy.

Bretta Tangerine was released at the brewery at the end of February and should just be arriving in the Seattle market.  Be sure to check your local craft bottle shop for Bretta Tangerine, all the rest of Firestone Walker’s Barrelworks series.  They’re the perfect compliment to our impending Spring.