Here is the full press release from Pike Brewing Company:

Pike Opens Summer Brewery Beer Garden
This summer, we’re opening the brewery doors to Post Alley and inviting guests to sit and sip among the tanks and kegs in our first ever Brewery Beer Garden! In addition to regular service at The Pike Pub and Tankard & Tun, guests can now enjoy a beer right inside the production brewery on Saturdays and Sundays through Labor Day weekend. “We want to offer visitors a new way to experience Pike beer and the brewery itself,” says Gary Szeredy, General Manager of The Pike Pub, “While guests visiting each floor of our restaurants can view aspects of Pike’s gravity-flow brew system, opening up the brewery lets them see firsthand where the process begins.” Featuring four beer taps and snackable landjager from Pike Place Market neighbors Bavarian Meats, the Brewery Beer Garden will be open noon to 6pm on August 11 & 12; August 18 & 19; August 25 & 26; and September 1 & 2. Please find photos attached. Visitors looking for an additional guided brewery tour experience are encouraged to book online

Flight of Dreams Opening Moved to October
The Flight of Dreams grand opening featuring the Pike Brewing Restaurant & Craft Beer Bar in Nagoya, Japan has been moved from September until October. In addition, legendary Chef Shiro Kashiba has been added to the list of influential Seattle brands set to represent Seattle in the new airport pavilion. Watch a video walkthrough of The Flight of Dreams pavilion to see the exciting progress taking place!

New Beer Release: Citrus Summer Ale
With the arrival of a Seattle heatwave, Pike Brewing is proud to introduce Citrus Summer Ale. This light golden ale features Lemondrop hops and has a clean, round mouthfeel that pops with bright citrus and light peppery notes. Crisp with a refreshing white head, this session ale clocks in at 4.2% and is available on draft and in 22-ounce bottles.

New Beer Release: Hopsie
Named after a character in the 1941 screwball comedy The Lady Eve, Hopsie is a collaboration pale ale brewed with Naked City Brewery to commemorate their 10th year anniversary! A lighter take on the classic pale ale style, this beer features a complex yet crisp palate. Hopsie is exclusively available on draft at Naked City Brewery’s Greenwood Seattle and Camano Island locations, and Pike Brewing Company’s The Pike Pub and Tankard & Tun in downtown Seattle. 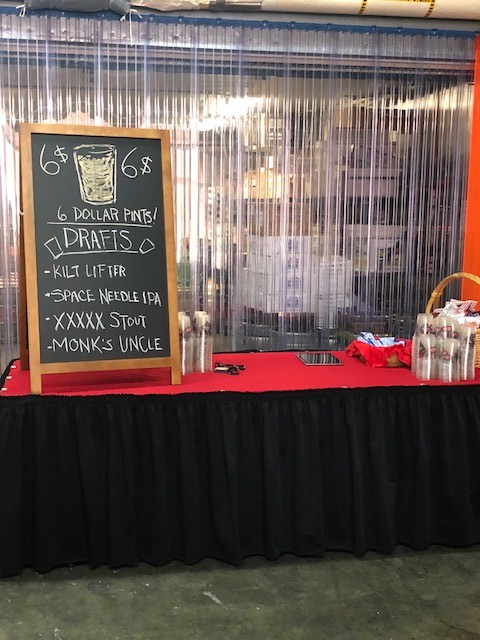 If you’d like to be among the first to enjoy a few Pike Brewing Company beers in the new brewery beer garden, then get down to Pike at noon tomorrow, August 11th. The other dates when you can enjoy the beer garden are listed above.  Of course, you don’t have to wait until tomorrow if you’d like to try Citrus Summer Ale or Hopsie, as they are both available right now.  Also, as noted above, you can also enjoy Hopsie at both Naked City Locations (Greenwood and Camano Island).