In the craft beer World, some breweries create more buzz than others.  It usually has mostly to do with the quality of their beers.  The greater the perceived quality of the offerings from said brewery, the greater the level of buzz and, of course FOMO.

One such brewery that often creates a buzz around their releases is Alesong Brewing & Blending out of Eugene, Oregon.  Their creations, which are often Belgian inspired and/or barrel-aged, are quite popular – and quite tasty.  I’m a particular fan of their Sour Ales and particularly enjoyed their Peche Sour, which was poured recently during Seattle Beer Week 10 at Brouwer’s Cafe for Sour Fest.  Now, Alesong is preparing to release four new beers, in bottles and cans, on May 27th. 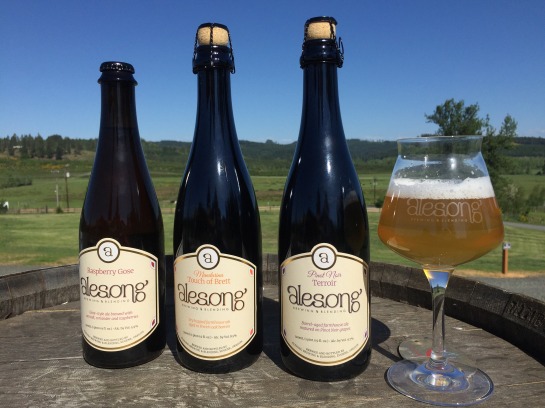 Here is the full press release from Alesong Brewing & Blending:

EUGENE, OR:  On Sunday, May 27th from 12 p.m. – 6 p.m., Eugene’s Alesong Brewing and Blending will release four new beers in bottles (and cans) and is hosting a celebration at its wine country tasting room and brewery (80848 Territorial Highway) for its mailing list members who purchase beer in the presale on their website (alesongbrewing.com) starting today. The celebration will take place on the patio and will feature all four new beers on tap with paired small bites for each and live music throughout the afternoon kicking off their Sunday summer music series which will run through Labor Day and feature local and traveling music groups all summer long!

Alesong is also hosting remote release and pickup parties for mailing list members in Portland at The Upper Lip on 5/30 from 5-8 p.m. and in Seattle at Teku Tavern on 6/5 from 5-8 p.m.  All four beers will be on draft with paired cheese bites for mailing list members who have participated in the pre-sale and the Alesong team will be on hand to chat about the new beers and deliver pre-sale purchases.

“We’ve always focused on our release parties as our preferred way to show off our new beers with food and provide a great experience for our members, and are really excited to expand that to include events in both Portland and Seattle for people who can’t make it down to Eugene” says cofounder Doug Coombs.  “Plus we have a bunch of great new member benefits including discounts on preorder beer and tasting room purchases!”

New beers being released include:

People interested in signing up on Alesong’s mailing list to pre-order beers for pick up at the release events or direct shipping (AZ, CA, CO, CT, DC, FL, MA, NE, NH, NY, OH, OR, PA, WA, WI) can sign up and find out more info at alesongbrewing.com/join

ABOUT ALESONG BREWING AND BLENDING: Alesong Brewing and Blending is a small artisan brewery based in the heart of Southern Willamette Valley wine country that crafts unique and small-batch beers with a focus on oak aging and Belgian-inspired techniques, brewing both wild and non-wild beers, using locally grown fruits, herbs and a host of special yeasts and other microbes.  Once the beer in the barrels has matured, the team samples and selects each barrel individually to blend. Paying homage to old-world Lambic blenders and artisan winemakers, Alesong believes that the final, balanced blend of a barrel-aged beer is much more satisfying than the sum of its parts or each individual barrel by itself. For more information, visit alesongbrewing.com.

As noted above, release parties are Alesong’s preferred way to release their beers, giving them a bit of control over the experience.  To pre-order these beers, go to alesongbrewing.com, then show up at the release party.  Even if you haven’t/can’t pre-order, drop by Teku Tavern on the 5th for the Seattle release party to taste all 4 beers on tap.  Please note that 2nd Can-niversary Collaboration IPA will be available on tap only outside of Oregon.