Last year, I told you about a new palace in Redmond called Growler USA. They were the newest location for the company, which has locations in over 19 states including Hawaii and Washington State (Vancouver).  Less than a year after opening however, Greg and Ann Humes – who ran the Redmond location for Growler USA – decided they’d rather be independent. So they broke ties with Growler USA and re-branded themselves as Hop House.

Freed from their corporate shackles, so to speak, Greg and Ann were free to curate their local tap selections as they saw fit, bring in more imports and actually reduce their total number of taps from 105 down to 75, in order to make more room for local liquors as well. Now, with Seattle Beer Week 10 (SBW10) about to kick off, Hop House has a few events they’d like to share, to bring a bit of SBW10 to the East side. 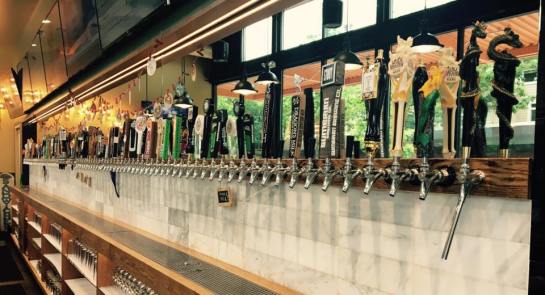 Here is some more information about the SBW10 events from Hop House:

Hop House would like to invite you to join them for their 2nd Annual Eastside Brewer’s Showcase! This is our Eastside response to SBW. It’s a great way to celebrate the great brews coming from our area east of Seattle and show our appreciation! Last year we showcased brews from 17 Eastside breweries and cideries, and this year we’ll feature over 20.

We kick off May 10 with a Chainline Brewer’s Night – then, until at least the 20th, we’ll have the doors open for featured Eastside brewers & reps to come in and informally discuss/pitch their taps to an adoring audience. Schedule to be announced.

On Thursday May 17 beginning around 4 pm, we’ll host a casual “Gathering of the Brewers,” at Hop House, where everyone is welcome to attend. Last year the brewers and brewery staff really enjoyed meeting and connecting with each other. We’ll also have live music starting at 7pm. Stay as long as you’d like!

If you find yourself on the East side during SBW10, drop by Hop House on the 10th and 20th for these events, or just drop by anytime to check them out, have a few pints and a good meal.  Since breaking with Growler USA, Hop House has also been able to pare down their menu a bit to give more attention to the items they found were most popular.