Spring is being stubborn in the Northwest this year.  With a few  1-2 day exceptions our temperatures have been, on average, lower than they should be for this time of year.  Fear not though, it looks like warmer temperatures will return by mid week and should be sticking around this time.  It’s a good thing too because, though it may still be Spring, Summer seasonals are starting to arrive. 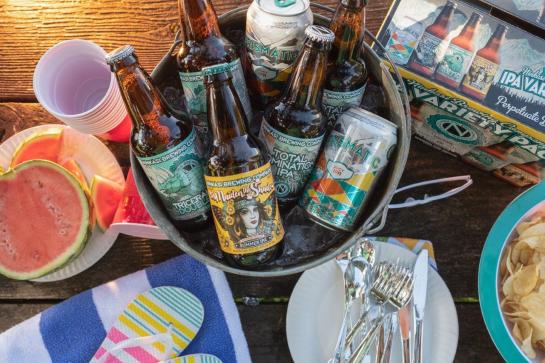 EUGENE, Ore.—April 26, 2018—Crafted for warm weather, Ninkasi Brewing Company brings back its sunny seasonal, Maiden the Shade Summer IPA, and launches its new Summer IPA Variety 12-Pack, featuring a mix of the brewery’s best IPAs in bottles and cans. Available May through September, both offerings can be found throughout Ninkasi’s distribution footprint.

Deemed a Summer IPA, Maiden the Shade captures a complex hop profile paired with an exceptionally smooth body. Inspired by the annual Oregon Country Fair, a three-day summer festival held in Oregon, Maiden the Shade is bold, dank and bursting with floral notes. Available next month, Maiden the Shade Summer IPA can be found on-tap and in 12 and 22-ounce bottles.

“When we first brewed this beer, we set out to capture the perfect warm-weather IPA,” says Jamie Floyd, Ninkasi founding brewer and co-founder. “Brewed with eight hop varieties and flaked barley, this beer’s multi-layer hop complexity is complemented by a smooth body, making it a go-to for any summertime fun.”

Bold and drinkable, this Summer IPA captures an impressively balanced hop complexity. An adventurous hop bouquet of eight select varieties is complemented by the use of flaked barley to create a beer that is as robust as it is easy to sip. Kick back and enjoy!

“This Summer IPA Pack really demonstrates the versatility of the IPA style,” says Floyd. “Whether your cheersing with bottles in the backyard or heading to the river with cans, this variety pack is ready to go wherever you choose to adventure this summer.”

To track down Maiden the Shade Summer IPA or the Summer IPA Variety 12-Pack, visit DrinkNinkasi.com.

Ninkasi’s Maiden The Shade IPA and the Summer IPA Variety 12-Pack should start appearing on Washington craft store shelves by the second week of May and will be available through September.  They’re perfect for those Summer cookouts and get-togethers.