Do you like a good pale ale?  Do you like blueberries?  Do you like vanilla?  How about hibiscus?  Now, what if you combine all of these things together and then can them?  The result would be Kitty Kat Blues Pale Ale in cans from Black Raven Brewing Company (CBM Sponsor).

Kitty Kat Blues is not a new beer. Black Raven has been making it for years, but this is the first time ever they’ve put it into cans. It’s also the first time I’ve seen a change in the recipe.  Prior to using hibiscus, Kitty Kat Blues got some of it’s unique and distinct flavor from the use of catnip in the recipe.  Yes, catnip.  I’m not certain why Black Raven has swapped out the catnip for the hibiscus.  The photo for the can release event on Facebook even still uses the old label – which clearly shows catnip as an ingredient, but I’m curious to try this new iteration.  Kitty Kat Blues in cans arrives this Friday, 3/16 at 3 pm. 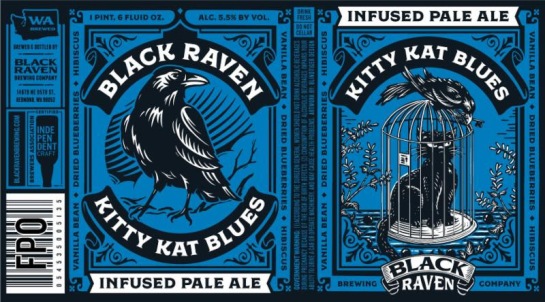 Here is some more information about this release from Black Raven Brewing Company:

THIS BEER IS NOW AVAILABLE YEAR ROUND IN SIX PACK CANS!

Join us in the taproom at 3PM to try the first batch of cans. We will be offering 12oz cans in the bar for $2.00 and encourage you to wear that awesome cat T-Shirt that you never really know when to wear.

Food truck for the release will be Slide Thru (arrives at 4PM)
https://www.seattlefoodtruck.com/food-trucks/slide-thru

About Kitty Kat Blues:
We took a Northwest Pale Ale and turned the screws a bit with the addition of dried blueberries, vanilla beans and hibiscus. The result is one easy drinking pale ale that finishes like this morning’s blueberry muffin.

Initial release limit of one six pack per customer.
This beer will be available year round and distributed throughout Washington, Northern Idaho and Alaska. 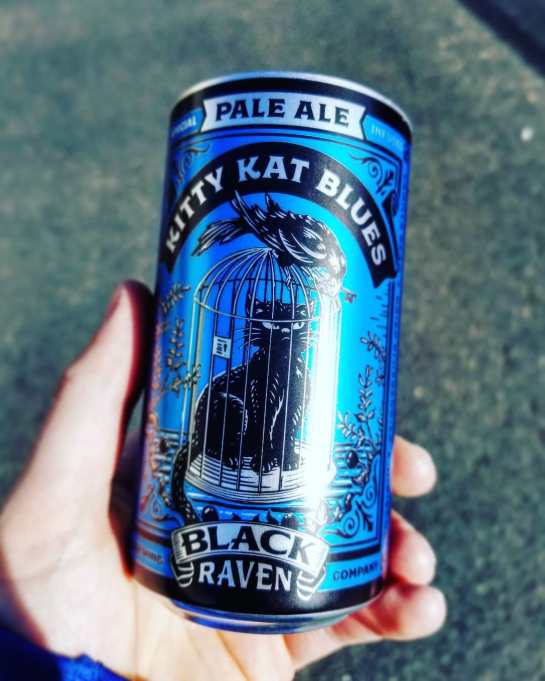 The first batch of Kitty Kat Blues in cans will likely go fast, which is why Black Raven is limiting people to just one six pack per customer on the 16th.  They’ll keep on brewing more though, year round, so in short order you shouldn’t have any trouble finding it at your local craft beer shop.  Meow.