Living in the South end and working the early hours I do, I don’t get to Ballard as often as I’d like.  Thankfully, I can usually find at least some beers from a few of my favorite Ballard area breweries either on tap at some good, local craft beer bars or in bottles or cans.

One of the breweries I try to visit when I do manage to get to Ballard is Lucky Envelope Brewing Company.  I enjoy their IPAs and a few of their more unusual offerings.  Now, Lucky Envelope is preparing to release five specialty beers in celebration of Chinese New Year – Year of the Earth Dog. 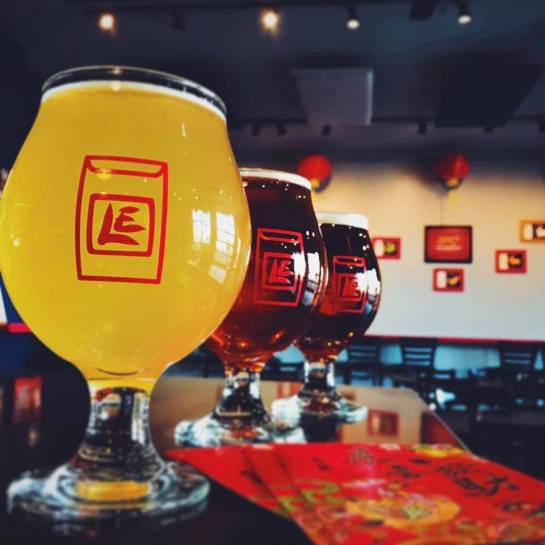 Seattle, WA – Lucky Envelope Brewing, whose founders are of Chinese descent, will celebrate the Year of the Earth Dog on Friday, February 16th and Saturday, February 17th with five specialty beer releases.

“Last year’s celebration was such a great success that we decided to extend the event to two days this year,” said Raymond Kwan, co-founder of Lucky Envelope. The brewery is excited to release five specialty beers for the event including their Buddha’s Hand Citron IPA, Lychee Sour, Double Happiness Barrel-Aged Porter, Mijiaya Historic Chinese Beer, and Tea-Smoked Helles Lager.

“Our Assistant Brewer Josh and I are particularly excited for our Lychee Sour and Buddha’s Hand Citron IPA,” says Barry Chan, co-founder and Brewmaster. “We have been focused on ‘culturally inspired beers’ and both of these beers combine elements of Asian food culture with traditional brewing techniques.”

Lucky Envelope will also be releasing their Double Happiness Barrel-Aged Imperial Porter which was aged twice, first in a Merlot wine barrel and then in a Westland Distillery 5-Malt whiskey barrel. The delightfully complex beer clocks in at 9.2% ABV with red stone fruit and oak tannin combining with vanilla, smoke, and caramel. Rounding out the special beer releases will be the return of the Mijiaya Historic Chinese Beer named after the 5,000 year-old Mijiaya archaeological site in Shaanxi (Northern China) and Tea-Smoked Helles Lager.

Those who arrive early on Friday & Saturday will receive a celebratory lucky envelope with special coupons. The brewery will also be selling limited edition Year of the Earth Dog t-shirts while supplies last.

Lucky Envelope Brewing takes its name from the Chinese tradition – tied closely with New Year celebrations – of elders bestowing often red-and-gold envelopes to loved ones as a gesture of luck and goodwill. Lucky Envelope is an award-winning family-friendly craft brewery in the Ballard neighborhood of Seattle. The brewery has garnered accolades since its May 2015 opening, including several medals at the 2017 & 2016 Washington Beer Awards and at the prestigious 2015 Great American Beer Festival® (GABF) competition.

Mark your calendar now for next Friday, February 16th and and Saturday, February 17th and come out to Ballard to help Luck Envelope celebrate, and to get yourself a taste of all 5 specialty beers.  I’ve had their Buddha’s Hand Citron IPA and their Mijiaya Historic Chinese Beer (which were also both released for Chinese New Year in 2017), but I’m looking forward to trying the Lychee Sour, Tea-Smoked Helles Lager and Double Happiness Barrel-Aged Porter.  As noted above, be sure to get there early each day to receive a lucky envelope with some special coupons.