In late 2016, Tin Dog launched their barrel program and bottled their first barrel-aged beers back in August of this year.  Then, just last month, they released their first two barrel-aged beers: Saison On Grapes (a bottle conditioned Farmhouse style Saison aged with Grapes in a Chardonney barrel) and Melange Une (a tart, lemony Ale that’s a blend of three different barrel aged beers). I’d like to apologize to my readers and to Tin Dog for not keeping you in the loop about those releases. Now, however, they’re preparing for their next barrel-aged release: Melange Deux. According to Tin Dog Brewing: “This delicate Blended Sour has a Champange celebratory quality perfect for the holidays! A little Sour, a little grassy with hints of nectarine, this is a lovely, balanced beer.” 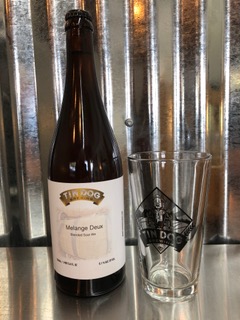 I missed out on both Saison On Grapes and Melange Une, so I’m looking forward to trying Melange Deux.  The release is set for next Saturday, November 18th from 3 – 6pm.  So why not come on down to South Park next weekend, enjoy a few Belgian style beers in Tin Dog’s newly expanded taproom (which more than doubled in size earlier this year) and pick up a few bottles of Melange Deux to take home?

Tin Dog is both dog and kid friendly and offers a few snack options in the way of small pizzas, empenadas, chips and salsa, peanuts and popcorn.  You’re also welcome to bring in outside food if you like. They also have a crowler machine so, if you find a beer on tap you like, you can take some home with you. If you can’t make it to the taproom, you’ll also often find Tin Dog at the West Seattle Farmer’s Market.