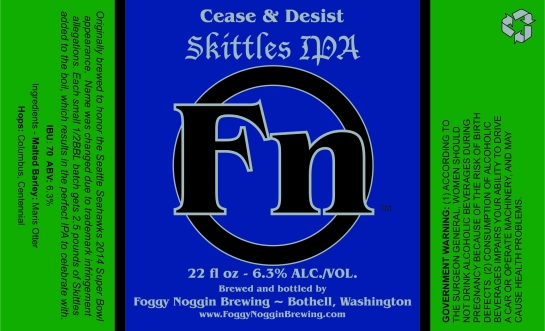 Football season has returned, much to the delight of NFL fans everywhere and especially Seahawks fans right here in Seattle.  After sweeping the pre-season 4 – 0, the ‘Hawks are ready to take on the challenge of making their way towards Superbowl LII (that’s 52 for those of you who aren’t up on your Roman numerals), and they’re going to need the help of you 12’s.

Of course, to cheer the Seahawks on properly, you’re going to need some good game-day beer. Sure, Marshawn Lynch is with the Oakland Raiders now, but that doesn’t mean we can’t still enjoy a beer inspired by Lynch’s time with the ‘Hawks.  That’s why Foggy Noggin Brewing Company is bringing back their popular football season brew: Cease & Desist IPA (Formerly 12th Man Skittles IPA – but I trust you see the legal issues he ran into there(?)).

Here is some more information about this release from Foggy Noggin Brewing Company:

It’s back! The return of Seahawks football can only mean one thing, Cease & Desist Skittles IPA is back for the season.  We release this beer the day before their season opener in our tasting room, both on tap and in bottles.  This is the beer that propelled the Seahawks to their Super Bowl victory in 2014. This English IPA is all English grown, floor malted Maris Otter and 2.5 pounds of skittles in each batch.  It has a nice hop character with healthy doses of Columbus and Centennial hops.  The result of this 6.3% ABV – 70 IBU beer is a delicious treat that will keep you in the game.
The popularity of this beer continues to grow and for many it just isn’t Seahawks football with Cease & Desist Skittles IPA.
We freshly bottle up a limited supply each week, available in our tasting room (Saturday’s – 12-5 pm).  Of course, growler fills and pints as well, but this beer runs out some weeks.  Get on in early to make sure you have your supply for Sunday’s big opener vs the Packers.

It may sound strange to add Skittles© candies to an IPA, and I’ll admit the taste is a bit unusual at first (and definitely not to style for an English IPA), but it’s actually quite tasty.  Don’t knock it till you’ve tried it.  Cease & Desist IPA will be available for purchase in bottles, on tap or for growler fills this coming Saturday, September 9th at the Foggy Noggin taproom: 22329 53rd Ave SE in Bothell.  Go ‘Hawks!