Even though I’m a big fan of craft beers, I do enjoy the occasional craft cider as well.  I sometimes head to one of my local watering holes fully intending to sample some ciders, but then I look at the tap list and I’m like, “Oh look! Three new craft beers I haven’t tried yet!”  As a result, I’m far less experienced and knowledgeable about craft ciders than I am craft beers.

Despite this inherent bias I have towards beer over cider, however, I definitely still appreciate a well made craft cider and usually do manage to try a few when I see something new and interesting.  So I’m a intrigued by the arrival of Louis Raison French Cidre, France’s #1 selling cider, which is set to make their U.S. debut this week.  There are five events happening around Seattle between August 15th and August 26th, where you’ll be able to sample their ciders and see what you think. 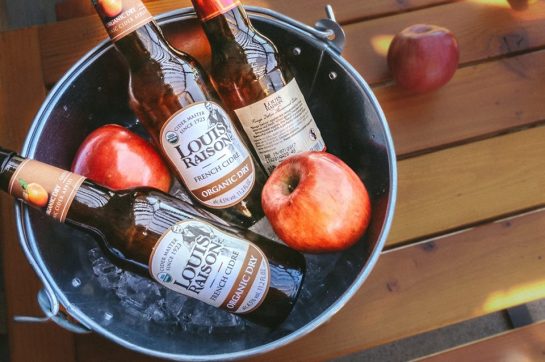 Here is the full press release from Louis Raison:

SEATTLE (August 2, 2017) – Louis Raison French Cidre – rooted in family tradition since 1923 – is excited to announce its upcoming US launch, scheduled to hit taps in Washington and Oregon beginning August 15. Located in Northwestern France, Louis Raison’s offerings feature traditional French apples, including a variety of bittersweet apples grown in the Brittany region by the Raison family for generations. Enjoyed throughout France as the country’s top selling cider, Louis Raison will introduce two of its crisp, refreshing, and naturally gluten-free ciders – Organic Dry and Rouge Delice – to the US on draft, with 11.2 ounce bottles available in early 2018.

“We’re excited to work with our distribution network and bring the market leader in French cidre to American consumers,” says Adam Carlson, National Sales Director for LR Imports, LLC.  “The growth of imported and craft cider continues to out pace the category providing an exciting opportunity!”

Upon launch, Louis Raison draft will be available at select restaurants and bars in Washington and Oregon. Louis Raison package products and extended distribution to follow in early 2018. Louis Raison’s launch offerings will include:

Rouge Delice (5.5% ABV): Awarded a gold medal at the 2017 Tastings competition, Louis Raison’s Rouge Delice is one of a kind in the cider market. Featuring Rouge Delice apples, which give this cider its rose colored hue, these proprietary apples can only be found in France and are used exclusively by the Raison family. The addition of Bittersweet apples gives this cider a bright acidity with hints of strawberry, cranberry, white tea, melon, and spiced apple. Draft available; package available early 2018.

To celebrate the launch, Louis Raison will be hosting tastings and events throughout the area during the month of August. Please join us:

Find more details about all Louis Raison launch events on Facebook (@LouisRaisonUSA). Keep on eye on Louis Raison social media pages for details on all launch events, as well as where to find the team and their cider!

A cider by a cider master, with a rich history in cider making. After almost a century of production, the Raison team has shown dedication to the longevity of their cider-making expertise, respect for its cooperative values, and the development of sustainable agriculture. Nothing short of a modern day family, it is only with the knowledge and expertise of its 300 producers and members of the cooperative that Louis Raison has become the market leader of cider in France. Years of experience have earned Louis Raison the mastery of the cultivation of apples from orchard to glass in a way that is helpful to the environment. Ultimately, Louis Raison is proud of its cooperative spirit – from producers of apples to cider drinkers, all are a part of the Raison family. Santé! For more information, follow Louis Raison USA (@louisraisonusa) on Facebook and Instagram or visit louisraison.com. Louis Raison is distributed by Columbia Distributing.

Craft cider has really taken off in the past few years.  It’s a great choice when you just aren’t in the mood for a beer and, of course, it’s extremely popular with the gulten-free crowd.  If you’d like to try out Louis Raison ciders, be sure to mark one of the dates above on your calendar and come out to taste of of the most popular cider brands in France.