Just last week I told you about the Harvest Collaboration Series form Bale Breaker Brewing Company, in which they paired with four different craft breweries to create the beers for the series.  They’ll have staggered releases from August through October.  Now, while they’re still in the collaborative mood, Bale Breaker is at it again with the upcoming release of Sesiones del Migrante Mango IPA in six-packs.

Sesiones del Migrante is a series of beers that Bale Breaker has brewed in conjunction with Mexican and American breweries, in a collaboration that spans 5 breweries and 2 countries.  Created in celebration of the Mexican migrant workers who travel to the Yakima Valley each year to help harvest the precious hops for all those wonderful craft beers we all enjoy, it’s due to arrive both on tap and in cans on September 7th and will see distribution throughout Washington and Northern Idaho.

5 thousand miles, 5 breweries, 2 countries, 1 cause. Sesiones del Migrante is a series of beers brewed in collaboration with Mexican and American breweries to celebrate the Mexican migrant workers who travel to the Yakima Valley to harvest hops for breweries across the globe. As part of this project, Bale Breaker will release Sesiones del Migrante Mango IPA in September in limited quantities of kegs and cans throughout its distribution footprint in Washington State and North Idaho. (Limited Can Release // Sept 7 // 5.9% ABV // 30 IBU).

THE BEERS & THE EVENTS
In May 2017, two of Bale Breaker’s brewer-owners, Kevin Quinn and Kevin Smith, traveled to Mexico to brew in Guadalajara and Colima. At Cerveza Loba, the brewers concocted Loba Nómada, a NE IPA featuring hand-peeled mangoes, a homegrown ingredient. In Colima, they brewed Vale Bale, an IPA with local coconuts. According to Cervecería de Colima, Vale Bale is “a beer inspired by all those people who leave their place of origin, with the firm aspiration to find a better quality of life.”

In early August, brewers from all four collaborating breweries will come to Yakima to brew Bale Breaker’s Sesiones del Migrante Mango IPA featuring the freshest Yakima Valley hops. A portion of the proceeds from our beer and events will benefit La Casa Hogar, a local non-profit that connects and educates immigrant Latino families.

“We’re happy that this brewing collaboration will create awareness of the hard work of Yakima’s Latino community. Their work both during harvest and year-round is essential to creating the hoppy beers everyone loves,” said Meghann Quinn, owner/business manager at Bale Breaker.

ABOUT BALE BREAKER BREWING CO.
Bale Breaker Brewing Company makes handcrafted ales that showcase the world-class hops grown in the heart the Yakima Valley. Hops are in the family’s DNA: the great-grandparents of sibling-owners Meghann Quinn, Kevin Smith, and Patrick Smith first planted hops in the Yakima Valley in 1932, the year before Prohibition ended. Over four generations, their love of hops has evolved into a passion for craft beer. Today, Meghann, Kevin and Patrick are in the midst of running an independent production brewery surrounded by their family’s hop fields, just down the road from where they were born and raised. 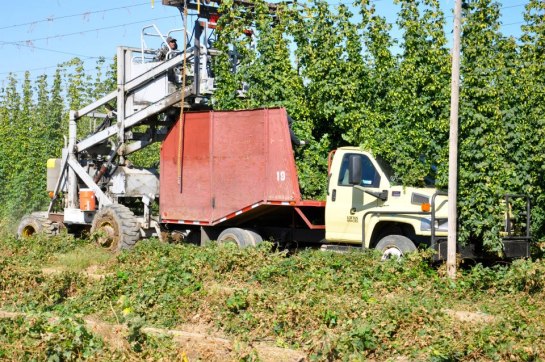 While Sesiones del Migrante Mango IPA doesn’t arrive until September, if you have the time to visit Bale Breaker Brewing on August 12th from noon – 3 pm, as noted above, you’ll be able to meet the brewers involved in this collaborative effort.  The popularity of collaboration beers today can’t be denied and I love that Sesiones del Migrante is being created to pay tribute to the workers involved in picking all those hops.