I wonder how many young craft beer drinkers today realize that they owe the wonderful proliferation of craft beer in the U.S., in small part, to President Jimmy Carter and his brother Billy.  On October 14th, 1978, spurred on by his brother Billy who was a homebrewer, Jimmy Carter signed a bill into law which allowed homebrewing of beer in the United States. Prior to this ruling, Sierra Nevada founders, Ken Grossman and Paul Camusi, had already been homebrewing in California’s Butte County.  When it became legal, however, they decided it was time to go pro and in 1979 Sierra Nevada Brewing Company as born in Chico.

Their first beer was the popular and iconic, Sierra Nevada Pale Ale, followed soon after by Celebration IPA (now discontinued). Today, Sierra Nevada still brews many excellent and well known beers including: Torpedo Extra IPA, Otra Vez Gose, Hoptimum Triple IPA and, of course, their classic Bigfoot Barleywine plus, of course, their annual Beer Camp series of collaboration beers.  Now Sierra Nevada is ready to release their latest Seasonal creation.  This year, they have teamed up with Germany’s Brauhaus Miltenberger to create the ultimate Oktoberfest beer. 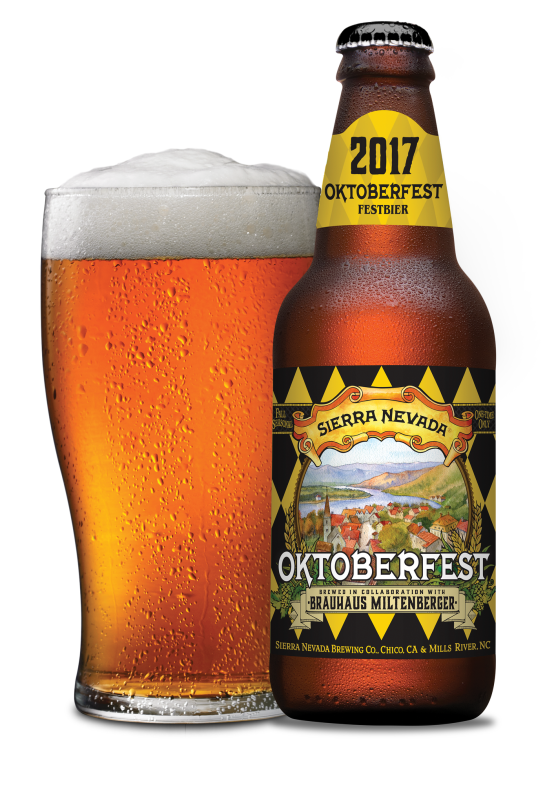 CHICO, CA — July 26, 2017 — Today Sierra Nevada Brewing Co. gave drinkers a window into a centuries-old German tradition with the introduction of its seasonal Oktoberfest festival beer.  For the past three years, Sierra Nevada has partnered with a  different German craft brewery to create an authentic fest beer fit for celebrating the world’s largest beer festival right here at home.  This year, Brauhaus Miltenberger, one of Germany’s most highly regarded craft brewers, was tapped for the collaboration.

“Cornelius and his team from Brauhaus Miltenberger embody the spirit and tradition of Oktoberfest,” says Brian Grossman, second-generation brewer for Sierra Nevada.  “It was a great to host them at our brewery in Mills River, NC, for the creation of this year’s fest beer.  They brought literally centuries of family brewing experience to the mix and helped us create the ultimate festival beer.”

“We tried to re-create a classic Oktoberfest beer in the true German tradition,” says Cornelius Faust, fourth-generation brewmaster for Brauhaus Miltenberger.  “We used traditional techniques to create layers of rich malt notes that remain light and crisp to the taste.  That’s the secret of an authentic fest beer—complex malt flavor in a lager that remains easy to drink while you are celebrating the Oktoberfest season.”

Sierra Nevada Oktoberfest is a deep golden lager weighing in at 6.1% ABV with an authentic, rich, and layered malt flavor balanced by traditional German-grown hops.  New for 2017 is Oktoberfest in 12-ounce cans, in addition to 12-ounce bottles and draught offerings.

Together with the launch of this year’s fest beer, Sierra Nevada today announced the dates for its Oktoberfest event series at the Mills River, NC, and Chico, CA, breweries.  Named one of America’s best Oktoberfest festivals, it’s an epic celebration of German culture and tradition, with live music, dancing, costumes, contests and, of course, beer.  Mills River welcomes guests Saturday, September 30, 2017, and Chico will host four fests over two weekends: Friday and Saturday, September 29-30 and October 6-7.  For more information and for tickets, please visit www.sierranevada.com/oktoberfest.

About Sierra Nevada Brewing Co.
Founded in 1980, Sierra Nevada Brewing Co. is one of America’s premier craft breweries, highly regarded for using only the finest quality ingredients. The pioneering spirit that launched Sierra Nevada now spans both coasts with breweries in Chico, California and Mills River, North Carolina. Sierra Nevada has set the standard for craft brewers worldwide with innovations in the brewhouse as well as advances in sustainability. It is famous for its extensive line of beers including Pale Ale, Sidecar® Orange Pale Ale, Torpedo®, Tropical Torpedo®, Hop Hunter® IPA, Nooner® Pilsner, Otra Vez™, Kellerweis®, Porter, Stout and a host of seasonal, specialty and limited release beers. Learn more at www.sierranevada.com.

With so many hot new breweries out today today, vying for the spotlight, it can sometimes become too easy to overlook the craft breweries who have been at it all along, brewing excellent beers.  Sierra Nevada has been doing it right for nearly 40 years now and still put out sought after beers like their classic Pale Ale, Torpedo Extra IPA, Hoptimum Triple IPA, Celebration Ale, Bigfoot Barleywine, Narwhal Imperial Stout and more.  I’m looking forward to trying their latest take on the classic Oktoberfest style.  Also, as a plus this year, you’ll be able to get it in cans, which will make it easy to bring some along on your late Summer/early Fall adventures.  Fall may not be here yet, but Sierra Nevada Oktoberfest is.  Pick some up today and start festival season early.