Firestone Walker Brewing Company has been making lots of changes lately.  Their Proprietor’s Reserve Series has been retired, their Vintage Reserve Series is moving from 22 oz to 12 oz bottles, they’re 5 versions deep into their new Luponic Distortion Series and now, Firestone Walker is proud to announce a new chronology of beers: Leo v. Ursus, a quarterly series of bold, hoppy, balanced beers born at their Propagator pilot brewery in Venice, California.

Fortem, an unfiltered imperial IPA and the first release in the new Leo v. Ursus Series, will be available on a pre-release basis at Firestone Walker locations starting on Saturday, February 25, and will begin rolling into Firestone Walker markets, including Seattle, at the end of February.

Venice, CA and Paso Robles, CA: After celebrating its 20th anniversary last year, Firestone Walker Brewing Company is set to chart fresh ground with the launch of Leo v. Ursus, a new chronology of beers that begins with the pre-release of Fortem at all Firestone Walker locations on Saturday, February 25.

Fortem, an unfiltered imperial IPA, will be officially released at the end of February in draft and 16-ounce can (four-pack) formats. Fortem will land in different Firestone Walker markets at variable times over the ensuing weeks (see www.leovursus.com for availability details).  It will be available for a short period before yielding to the next quarterly one-off release in the Leo. v. Ursus Chronology.

While diverse in style, each beer in the Leo v. Ursus Chronology will exhibit unifying threads—they will be bold, intense and often hoppy, but always with a native sense of balance. Many will also address “wish lists” expressed by loyal fans.

Brewing Team Unleashed
The Leo v. Ursus Chronology is born of a longing for high experimentation that was finally fulfilled by the recent launch of the Propagator, Firestone Walker’s pilot brewhouse in Venice, California.

“To say that our brewing team is pumped about Leo v. Ursus would be an understatement,” said Brewmaster Matt Brynildson. “Until the Propagator came along, our ability to experiment and go crazy with tiny batches was limited. The shackles are now off.”

The Propagator is a state-of-the-art miniature brewery made by Kaspar Schulz of Germany. It is designed to brew small, nimble batches, enabling the brewing team to explore new ideas and tinker with the results—which can then be fine-tuned and scaled at the main brewery in Paso Robles.

“Leo v. Ursus opens the door to increased creativity with new and exciting raw materials—namely, a host of new hop cultivars that do not fit into our established recipes,” Brynildson said. “We will also explore dark malts, experimental hops and alternative grains in this program.”

Fortem Pre-Release
Fortem (Latin for “The Strong”) is a new-age imperial IPA that draws upon a range of influences, all while exhibiting DNA from Firestone Walker’s own forays into the IPA style—including Double Jack and Luponic Distortion.

The intent of Fortem is to achieve power through balance, delivering amped-up aromas and mouthfeel while keeping bitterness on a leash. It blends newer hop varieties from the Pacific Northwest and Hallertau, Germany along with pale malt, wheat malt and flaked oats for a full body and a rounded texture.

Fresh Fortem (to be canned and kegged on February 24) will be unveiled for pre-release sampling and purchasing starting at 10 a.m. on Saturday, February 25 at all Firestone Walker locations: the Brewery Emporium in Paso Robles, Taproom Restaurant in Buellton, and the Propagator Brewery Store in Venice.

Nomenclature & Artwork
The name Leo v. Ursus is a nod to the brewery’s distinctive culture of purposeful conflict, as embodied by founders Adam Firestone (The Bear) and David Walker (The Lion). Much in the way that Latin signifies a common root language, the Leo v. Ursus Chronology goes to the heart of Firestone Walker’s internal brewing identity—hence the use of Latin nomenclature.

To reimagine the Lion and Bear for Leo v. Ursus, Firestone Walker worked with Venice-based artist Todd Francis, whose work is legendary in the skateboard industry. Francis’s localized aesthetic reflects the neighborhood culture surrounding the Propagator pilot brewhouse, making his work a natural fit for beers largely inspired by experimental brews conceived at this location.

Along the way, Francis illustrated the Lion and Bear in a more aggressive stance, signifying the union of boldness and balance that one can expect from each beer released in the Leo v. Ursus Chronology.

“This is a new chapter for us,” Brynildson said. “We will go to our graves wishing we had made the perfect beer—but we will give it our best shot with Leo v. Ursus.” 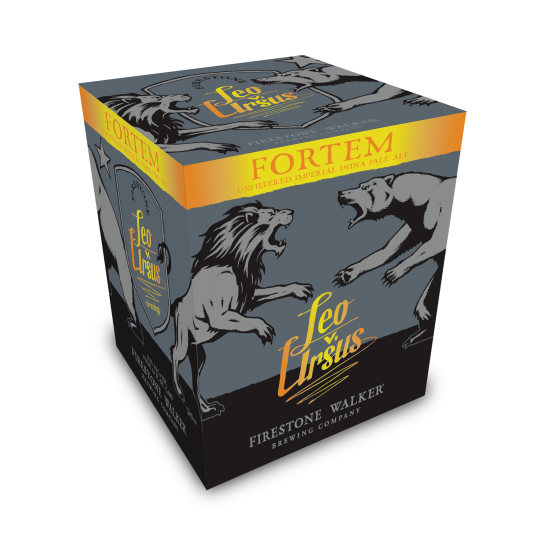 Fortem should start arriving in the Seattle area by late February to early March.  As with the releases in their Luponic Distortion Series, Fortem will have a 90 day release window, after which Firestone Walker will release their next creation in the Leo v. Ursus Series.

3 thoughts on “Leo v. Ursus Is Coming From Firestone Walker”