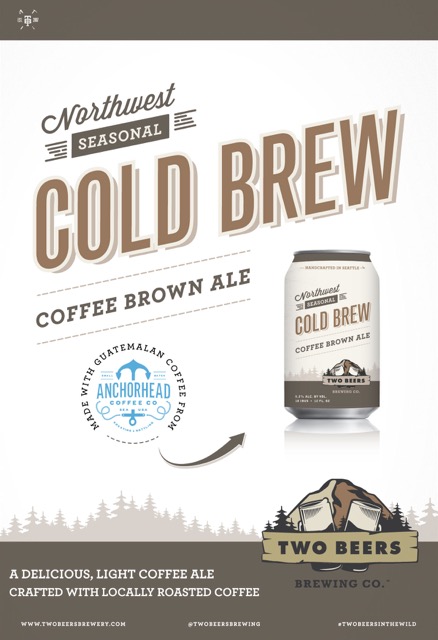 Back in early 2015, I first told you about the debut of Cold Brew Coffee Brown Ale from Two Beers Brewing Company (CBM Sponsor).  It’s coffee-forward aroma and flavor are the perfect marriage of two quintessentially Seattle flavors: coffee and craft beer. Available seasonally from late Winter through Spring, Cold Brew Coffee Brown Ale is low in acidity and subtly sweet.

For this year’s iteration of Cold Brew, Two Beers has partnered with Seattle’s own Anchorhead Coffee. According to Two Beers’ founder, Joel VandenBrink: “Their unique roasting process and the flavors that shine through make this beer one of our favorites, and perfect for everything from brunch to backpacking.” 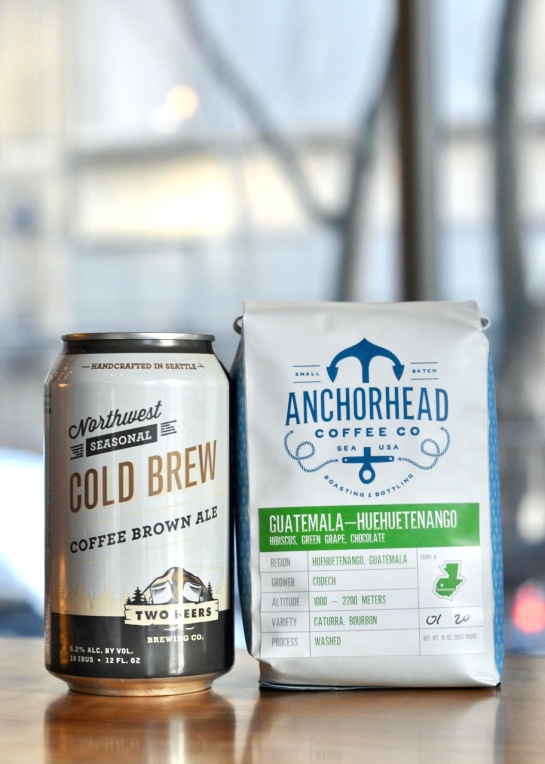 SEATTLE (February 1, 2017) – Two Beers Brewing Co. is excited to announce the return of its Cold Brew Coffee Brown Ale, with a new highly caffeinated partner: Anchorhead Coffee. A chocolaty brown ale infused with locally roasted beans from the popular small batch roaster, this Seattle-inspired beer is crisp, refreshing and subtly sweet with a cold brew kick. Available in 12-ounce cans beginning Thursday, February 2 at The Woods tasting room and on draft at Anchorhead’s downtown Seattle cafe, Cold Brew will soon be available throughout the Pacific Northwest.

“We love partnering with local companies like Anchorhead to take beer to the next level,” said Joel VandenBrink, founder of Two Beers Brewing Co. “Their unique roasting process and the flavors that shine through make this beer one of our favorites, and perfect for everything from brunch to backpacking.”

“Ever since we started this company, we wanted to partner with a brewery to do a cold brew specific beverage, and we couldn’t be happier that it’s with Two Beers Brewing,” added Anchorhead Coffee Co-Founder Jake Paulson. “We tested every coffee we have for this collaboration, and are very excited with the end product!”

Anchorhead Coffee is a small batch roaster focusing on sourcing the best coffees available, one of which is the Guatemala Codech found in this Cold Brew Coffee Brown Ale.  Tucked in the Sierra De Los Cuchumatanes, the highest mountain range in Central America, the Codech Co-op produces some of the best coffees in all of Guatemala.  This coffee undergoes a washed process, and offers notes of hibiscus, green grape, and chocolate.

To create this beer, a process similar to the one used to make cold brew coffee is used. Starting with a base of chocolaty brown ale, the beer is run through a second fermenter containing 18 pounds of course ground coffee beans per batch. The beer is run through these beans continuously for four hours before sitting on the beans for another 20 hours, making for a balanced and flavorful brew. Low in acidity and subtly sweet due to the cold brew process used, a rich coffee nose and flavor shines through. However, while the flavor may be bold, there is no caffeine in this delicious brew, offering an approachable 5.2 percent ABV and 18 IBUs.

About Two Beers Brewing Co. Two Beers Brewing Co. – makers of EVO IPA, Wonderland Trail IPA and a host of Northwest-inspired beers – began operations in a small Seattle basement in 2007. Today, Two Beers Brewing produces twelve unique beers including six year-round, seven seasonals, and a host of intricate infusions and limited releases in its SoDo brewery. Two Beers Brewing can be found on tap in bars and restaurants throughout Washington, Oregon, Idaho and Alaska, with tastings, kegs and growler fills available at The Woods tasting room Tuesday – Thursday from 3-9 pm, Friday from 3-10pm, Saturday from 1-10pm and Sunday from 1 – 6 pm. Select brews can also be found in 22-ounce bottles and 12-ounce cans through the tasting room, as well as local retailers in Washington, Oregon, Alaska and Idaho. With a strong belief in supporting the local economy, Two Beers Brewing takes pride in using Washington ingredients to create all of its handcrafted beers. For more information, visit www.twobeersbrewery.com.

Cold Brew Coffee Brown Ale arrives today, 2/2.  It will be available both on draft and to go in 12 oz cans in The Woods taproom at Two Beers Brewing as well as at Anchorhead’s downtown Seattle cafe. Stop by for a pint or pick some up on your way home and enjoy its crisp, refreshing and subtly sweet flavor as we prepare to welcome Spring back to the Northwest.