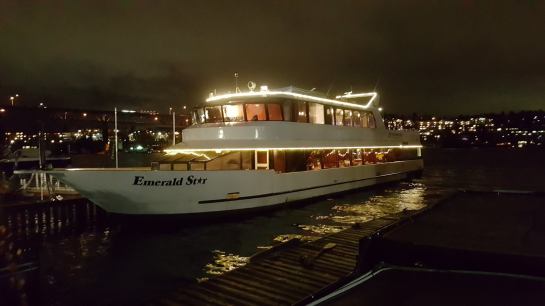 Last Friday, December 2nd, my wife and I attended a beer tasting dinner cruise courtesy of Waterways Cruises And Events, featuring beers from Pike Brewing Company.  This is the cruise I told you about just last month, which took us around Lake Union and Lake Washington as we enjoyed 5 different Pike Brewing Company beers and enjoyed a delicious, 4-course dinner.

Apart from a few somewhat loud and annoying shipmates at the next table and a small technical difficulty involving the last beer of the evening, we had a great meal and a wonderful time.  As a special bonus that we weren’t expecting, Charles and Rose Ann Finkel, founders of Pike Brewing Company, were in attendance on the cruise (as well Pike’s Jon Gores).  Charles took the time to visit each and every table, and spoke to us all at length about his passion for beer, Pike Brewing Company and the beers we would be enjoying during the cruise. 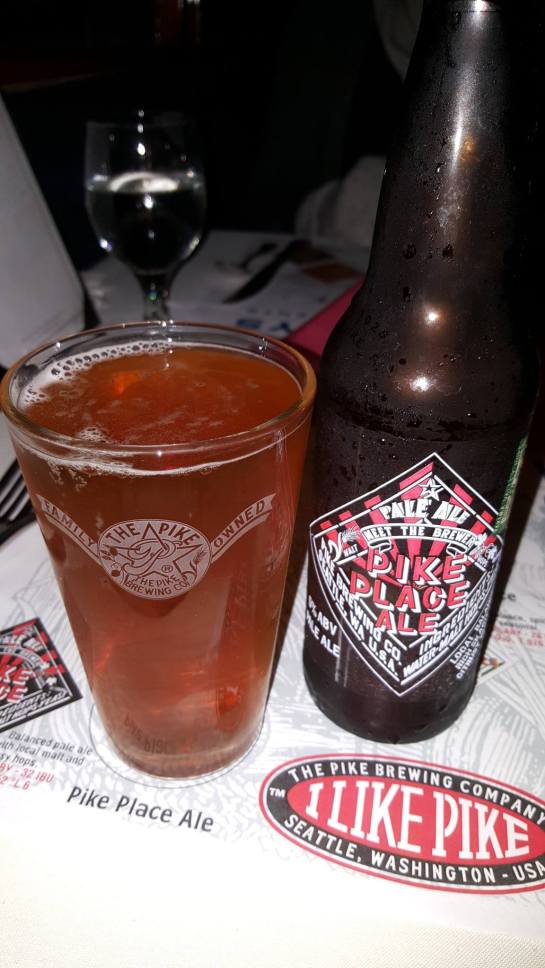 After enjoying a  pre-cruise drink down the street at Ivar’s Salmon House, we headed for Waterways Homeport at 6:30 pm for boarding.  We were welcomed aboard and shown to our window table for 2.  As the other guests were arriving and we prepared to set sail, we were served our first beer of the evening: Pike Place Ale. 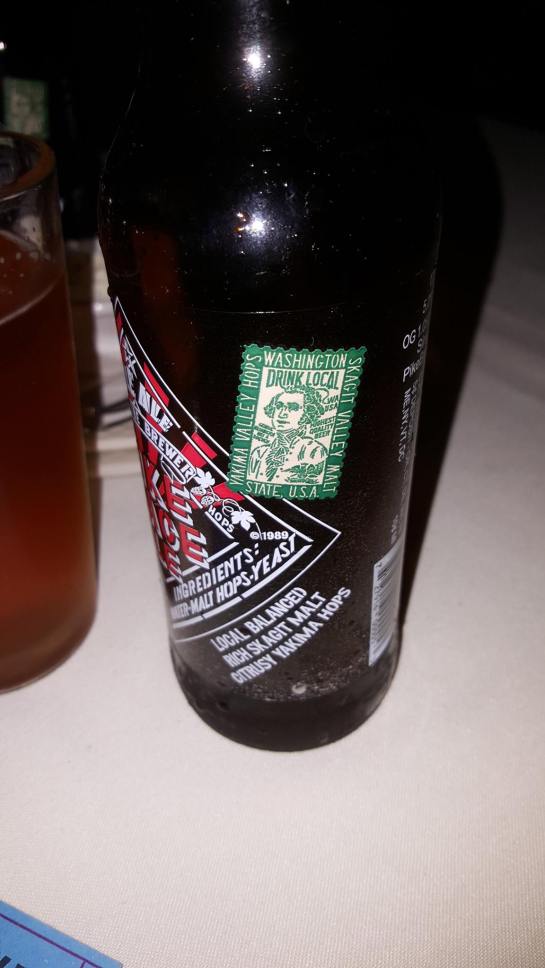 Made With 100% Washington Grown Ingredients

Pike Place Ale was, in a sense, recently ‘reborn’ at Pike Brewing.  It was the first beer they ever brewed way back in 1989 on their 4 barrel, copper kettle brewing system but, at the time, they were denied use of the “Pike Place” name.  The Pike Place Market didn’t want Pike Brewing (who also originally wanted to use the name Pike Place Brewing), to use the name. Well, nearly 30 years later, Pike Place Market had a change of heart and told Pike Brewing they would be proud to have the beer carry the Pike Place name.  It’s a well balanced Pale Ale, made with 100% Washington State sourced ingredients, including Skagit Valley Malt and hops form Washington’s Yakima Valley. 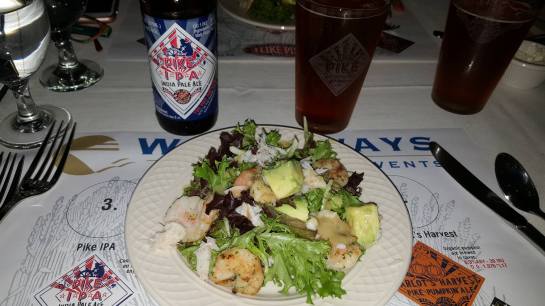 Shortly after getting under way, we were served our first course: Grilled Shrimp and Arctic Crab Salad with avocado and a light, creamy lemon-Dijon dressing paired with Pike IPA.  It was a delicious way to kick off our meal and also a reminder to me that Pike IPA is sometimes underrated.  These days, in the rush to find and try all the new IPAs that keep flooding the market, we can sometimes forget about the mainstays that have been doing it right for years. Pike IPA has a refreshing, lightly citrusy flavor with a few piney notes and paired well with our salads. 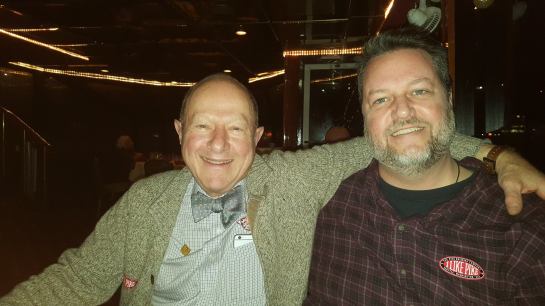 Me With Charles Finkel (My Wife Took The Photo)

My wife and I have known Charles and Rose Ann Finkel for a number of years now and, as we were finishing up our salad course, Charles took the mic. to speak to everyone.  He’s still as passionate as ever about craft beer and it shows in his enthusiasm and his desire to educate people about craft beer history.  A bit later on, he came and sat with us to say hello.  It was great catching up with him and Rose Ann, who also stopped by our table briefly to say hi. 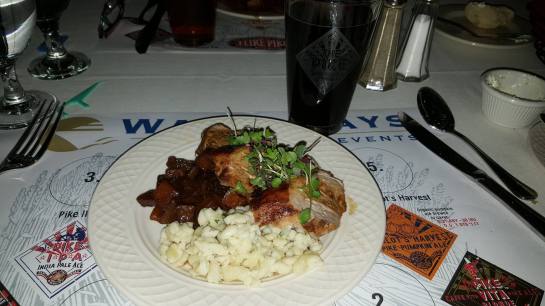 As our tables were cleared of salad plates and our empty glasses of Pike IPA, we prepared for our second course: Asian Barbecued Pork Loin with caramelized butternut squash and herbed späetzle paired with Harlot’s Harvest – Pike’s Pumpkin Ale.  I wouldn’t have thought to pair Asian pork loin with a pumpkin ale (pumpkin ales are more often paired with desert courses), but the combination worked quite well. Thankfully, Harlot’s Harvest isn’t over-spiced, like some pumpkin ales out there.  Charles Finkel, who does all of the artwork for most of Pike’s labels, said that Harlot’s Harvest was the most salacious label he’s created.  It’s also a reminder that Pike Brewing was founded in the LaSalle Hotel, a former brothel run by Madam Nellie Curtis (for which Pike’s Naughty Nellie Golden Artisan Ale is named). According to Charles, Rose Ann even modeled for the Harlot’s Harvest label – but only her hands. 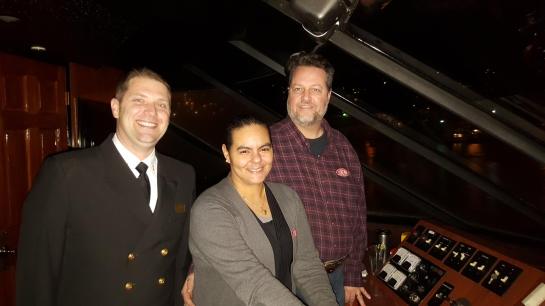 My Wife, Lynn, And I On The Bridge With The Captain

As a special treat after the second course, my wife and I were invited up to visit with the Captain, take in the view from the bridge and hold the wheel for a bit.  I must admit, I was bit envious of the Captain’s job, which is understandable since I spend most of my days in an office cubicle looking at a computer screen. 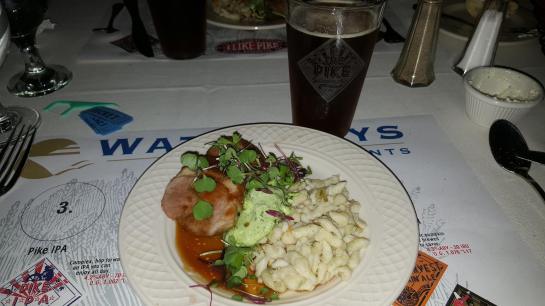 After our visit with the Captain came course number 3: Pan Seared Duck Breast with creamed spinach, a spicy plum sauce and herbed späetzle paired with Pike Auld Acquaintance Hoppy Holiday Ale.  I’m a big fan of duck.  You don’t see it on too many menus and that’s a shame because, when prepared properly (as this indeed was), duck is one of the most juicy, tender and succulent meats.  The creamed spinach and spicy plum sauce complimented the duck breast very well and it paired excellently with Auld Acquaintance which, also like Harlot’s Harvest, is not over-spiced like some holiday ales can be.

The wait after the third course seemed a bit longer than usual, and we could tell the ship was getting closer to port. Also, the table across from us seemed to be getting louder with each round of drinks.  It didn’t seem like the ladies at that table had much interest in the beers being paired with our meal, as a couple of them ordered wine or other drinks instead. They kept laughing at things they were showing each other on their cell phones, and getting louder each time. 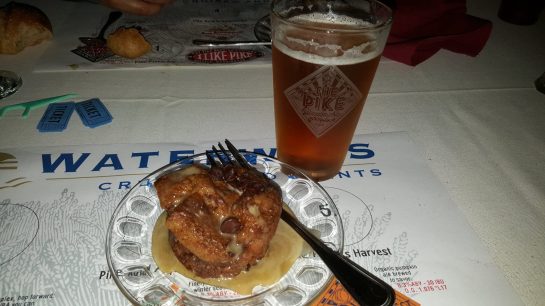 After enduring their antics for a few minutes, it was announced that there was a problem with the keg pump for our last beer.  A seal on the pump had broken, and they couldn’t get the beer out of the keg.  Thankfully, they had a spare pump at the dock, so the ship headed in and we enjoyed our last course: Chocolate Bread Pudding paired with Pike’s Vita Blonde Coffee Ale, at the dock.  The bread pudding was excellent and was topped with a Cafe Vita infused creme anglais sauce. It was delicious and paired quite well with the Vita Blonde Coffee Ale.  It was their version of coffee and cake, and a nice way to end the evening.

This beer tasting dinner cruise was a very enjoyable experience that I would recommend to anyone looking for a unique and/or romantic evening right here in Seattle.  The cost is reasonable for the experience as well, starting at $70 per person for the cruise and four-course pairing dinner (you can upgrade to a guaranteed window table for 2, 4 or 6 for an additional fee).  Waterways Cruises And Events has several different types of cruises to choose from, including their Weekend Brunch Cruise, Sunset Dinner Cruise, Holiday/Special Event Cruises and more.  Their next beer pairing dinner cruise is set for Friday, January 13th and will feature beers from Hellbent Brewing Company.  Tickets for that cruise are available now on Waterways’ website.  Take a look and maybe you’ll find a cruise that piques your interest.