My craft beer World was rocked recently by the news that Firestone Walker Brewing Company was going to be retiring their Proprietor’s Reserve Series of beers, which includes one of my all time favorite IPAs: Double Jack.  As dismayed as I was by the news, the announcement actually follows a trend that seems to be taking hold in the craft beer World.  Perhaps you’ve heard the term being thrown around out there: The death of the flagship.

It seems, if you want to remain popular and buzz-worthy in today’s craft beer World, you can’t just rest on your brewing laurels.  The breweries that are garnering the most attention and publicity are those who are constantly coming out with something new.  Well, if you want to brew something new, that means you often have to stop brewing something old. 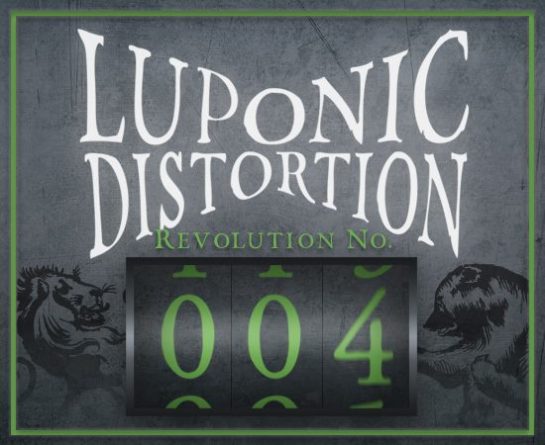 Luponic Distortion is not a single beer, but rather an ongoing series of beers that revolves approximately every 90 days. While the base beer always remains the same, each revolution features a different hop blend built around experimental hops, designed to showcase the growing possibilities of pure hop aromas and flavors.

While each prior revolution of Luponic Distortion was inspired by Brewmaster Matt Brynildson’s own deliberate forays into the world of experimental hops, Revolution 004 originated from a more serendipitous discovery.

As Matt tells it, his brewmaster friend Rodger Davis of Faction Brewing recently shared some hops that he procured from South Africa for his own Western Cape IPA. Rubbing and smelling the hops, Matt was blown away—and sufficiently intrigued to start making some phone calls.

“I’ve worked with Southern Hemisphere hops from New Zealand and Australia, but South Africa wasn’t really on my radar until that moment,” Brynildson said. “South Africa is a bit outside the ideal growing belt, yet these hops presented these super explosive tropical qualities—every bit as interesting as what we’ve going on here. I was saying to myself, ‘Who’s the genius down there, I’ve got to find out.’”

He added, “Rodger warned me not to fall in love with these hops because there wouldn’t be enough for me to do anything on a sizeable scale. But it just so happened that my timing was perfect and I got some that were just coming off the shipping container. I told the supplier not to let me take all of the hops at the expense of other small brewers. So basically he sold me enough hops to do this one beer.”

“Revolution 004 is a departure from the more citrusy stone fruit personality of Revolution 003, but as always you will sense common threads,” Brynildson said. “And once again, all of these bold fruit aromas and flavors are derived wholly from pure hops.”

I’m really intrigued by the use of South African hops in this version of Luponic Distortion.  I’m curious how these hops (which Brynildson describes above as having “pronounced tropical fruit qualities, along with distinct white grape and floral notes.”) will compare to other IPAs I’ve had, brewed with domestically produced hops, many of which can also have some tropical notes.  Thankfully, we won’t have to wait long to find out.  Luponic Distortion Revolution No. 004 is shipping now and should arrive in the Seattle area within a week or two.

One thought on “Luponic Distortion Revolution No. 004 Arrives This Month From Firestone Walker”