Earlier this month, Reuben’s Brews celebrated their 4th Anniversary.  It was a great party with an amazing tap list, featuring a new IPA and 3 different barrel-aged beers to enjoy.  I particularly enjoyed their new Hopped Off The Press IPA.  I hope they brew it again and send some cans to local retailers.

Until then, however, I’ll have to be satisfied with Reuben’s latest news.  Their Roasted Rye IPA, the beer that started it all for them, is now available in cans, and they have 3 new beers ready to debut for Fall.  Say hello to Imperial Pumpkin, Life on Mars and Amarillo Fresh Hop. 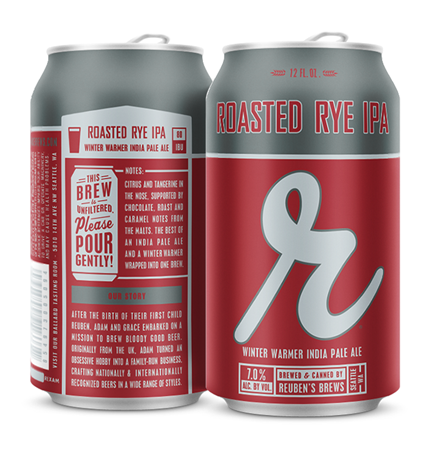 Here is the full press release from Reuben’s Brews:

SEATTLE, Wash. (Aug. 24, 2016) —The days are getting shorter and summer is slowly waning. But don’t fret! Over the next few weeks, Reuben’s Brews is releasing four beers to help ease you into fall.

On August 25th, Roasted Rye IPA will hit shelves for the first time ever in 12oz cans.

“This is the beer that started it all for us,” says Adam Robbings, Co-Founder and Head Brewer of Reuben’s Brews. “The first recognition I ever won as a home brewer was for the Roasted Rye IPA back in 2010. It’s still one of my favorites and it reminds me of how far we’ve come in those six years, since the days of brewing in my garage.”

Coming in at 7% ABV and 80 IBUs, Roasted Rye IPA has citrus and tangerine in the nose, supported by chocolate, roast and caramel notes. It’s like an India pale ale and a winter warmer in one tasty brew! 22oz bottles and draft availability will follow as we get into fall.

Also on the beer horizon:

About Reuben’s Brews
After the birth of their first child Reuben, Adam and Grace embarked on a mission to brew bloody good beer. Originally from the UK, Adam turned a passionate hobby into a family-run brewery crafting nationally and internationally recognized beers in a wide variety of styles. Since opening in 2012, Reuben’s has won awards for its beers around the world including at the Great American Beer Festival, the World Beer Cup, the US Open and was named Mid-Sized Brewery of the Year at the 2015 Washington Beer Awards. Find Reuben’s Brews in Western Washington and at its taproom located at 5010 14th Ave NW in Ballard, open 7 days a week. For more information, visit www.reubensbrews.com or follow on Facebook, Twitter and Instagram (@reubensbrews).

I’m not quite ready for Pumpkin season yet myself, but I’m quite eager to try Reuben’s Amarillo Fresh Hop.  The exact release date has not been announced yet (as noted above), but I will give you an update once more information is available.  I had some of their Life on Mars at the Anniversary celebration and it was delicious.