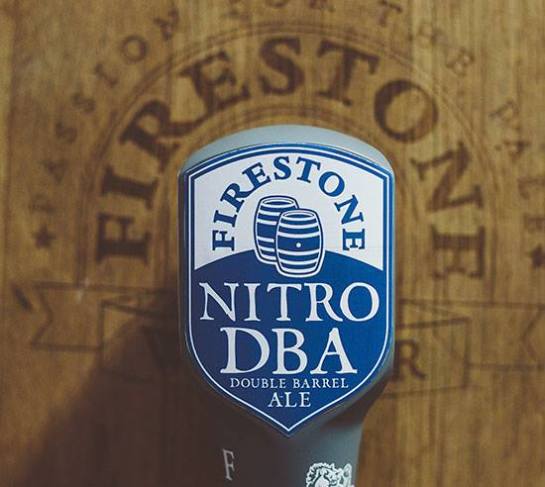 Firestone Walker Brewing Company makes some delicious beers.  Their Parabola is one of my all time favorites and their Double Jack is one of my top (if not my top) IPAs.  Also, in case you weren’t aware, the 2016 release of Stickee Monkee is out now.  Hurry and grab yourself a bottle before it’s all gone.

Another beer from Firestone Walker that is very popular is their flagship DBA (Double Barrel Ale).  They also made a special version called Double DBA for a couple of years, but it has since been discontinued.  Now, Firestone Walker is ready to bring us another DBA variant.  This week, they are launching Nitro DBA as a new year round draft offering in all Firestone Walker markets, including Seattle.

Also, to help celebrate their 20th Anniversary this year, Firestone is releasing Unfiltered DBA (UDBA), a 100-percent oak fermented and unfiltered version of DBA, which will be available in all Firestone Walker markets for a limited time.  Get it while you can.

Paso Robles, CA—A Firestone Walker classic is set to be recast in its 20th anniversary year as DBA gets nitro treatment for the first time ever, resulting in a fresh twist on a longtime flagship.

“DBA is the beer that started it all for us in 1996, but this may be its truest form yet,” said David Walker.

Indeed, as an English-style bitter, DBA enjoys a natural synergy with the nitro style, which itself mimics the textural qualities of traditional British cask ales. When brewed and pushed to the tap with nitrogen gas, DBA achieves brilliant clarity in the glass; thick, long-lasting foam; and an ultra-creamy mouthfeel.

“I think this is the perfect presentation for DBA,” said Brewmaster Matt Brynildson. “DBA has all of these subtle toffee, caramel and oak nuances that really come to the forefront with nitro, and you get more of a cask ale feel that goes right to the heritage of the English bitter style.”

Nitro DBA will launch as a year-round draft offering across all Firestone Walker markets starting next week.

In addition to the nitro version, DBA is also being released in another format this summer—specifically Unfiltered DBA (UDBA), a 100-percent oak fermented and unfiltered version of DBA.

First made as a brewery-only staple, UDBA will now be available on draft nationwide in limited quantities in celebration of Firestone Walker’s 20th anniversary. UDBA is fermented entirely in in the patented Firestone Union oak barrel brewing system, then left unfiltered for enhanced oak expression with a hazy nod to the British pale ales of yesteryear.

Today, DBA still stands as a proudly malt-forward alternative to the hoppy beers that have come to dominate the market.

“This beer goes back 20 years, but I think it still tastes current,” Brynildson said. “This nitro version is a great excuse for people to get reacquainted with DBA.”

“DBA is a beer I have drunk regularly for nearly 20 years,” Walker said. “It still brings a smile to my face and will always represent so much more than the beer itself. It was our beginning.”

Nitro DBA should start appearing in the Seattle area soon and UDBA should appear shortly thereafter.  Be sure to keep an eye out for them and discover a whole new way to enjoy Firestone Walker’s classic DBA.