I never cease to be amazed at how much the Seattle craft beer community does for charity.  Breweries, craft beer bars and, of course, all of us craft beer lovers can always get behind helping those in need.  Of course, it’s nice when providing that help also gives us the added bonus of even more great craft beer to drink.

Two Beers Brewing Company (CBM Sponsor) is one of those breweries that loves to give back.  They have teamed up with Lifelong, a leader in the fight against HIV/AIDS since 1983, to create Lifelong Lager, which will benefit Lifelong’s food program, Chicken Soup Brigade – providing nutritious meals in Washington to those living with serious illnesses like HIV, AIDS and cancer.

There will be a special preview event for Lifelong Lager at Two Beers Brewing’s tasting room, The Woods, on Friday, April 22.  Then, Lifelong Lager will be tapped at more than 150 restaurants throughout Western Washington on Thursday, April 28, supporting Lifelong’s Dining Out for Life event. For every keg sold, Lifelong will receive a $50 donation to help fund the Chicken Soup Brigade.

With a special preview event at Two Beers Brewing’s SoDo tasting room on Friday, April 22, Lifelong Lager will be tapped at more than 150 restaurants throughout Western Washington on Thursday, April 28, supporting Lifelong’s Dining Out for Life event. For every keg sold, Lifelong will receive a $50 donation to help fund the Chicken Soup Brigade. Kegs will continue to be available to bars and restaurants throughout Western Washington until the end of May.

“We consider this kind of creative community involvement an important part of our mission,” said Joel VandenBrink, founder & CEO of Two Beers Brewing. “The team from Lifelong have all been long time supporters of the brewery, and we’re excited to be able to return the favor on an annual basis with this delicious beer.”

Chicken Soup Brigade, founded in 1983, improves the nutritional health of individuals living with chronic conditions and hunger. Chicken Soup’s clients have specific health challenges, such as HIV, diabetes, kidney disease, cancers, or disabling arthritis. Most are living below the Federal Poverty Level, and all require assistance in managing their nutritional health. Chicken Soup offers a comprehensive food and nutrition program designed not only feed people but to nourish them. In 2015, Chicken Soup Brigade provided vital food and nutrition services to almost 1,700 people in the Puget Sound region, as well as filled and distributed 35,652 grocery bags and served 167,234 meals.

About Two Beers Brewing Co. Two Beers Brewing Co. began operations in a small Seattle basement in 2007 and today, produces fifteen unique beers including eight year-round, seven seasonals and a host of intricate infusions in its 4,800-square-foot SoDo brewery. Two Beers Brewing can be found in Seattle-area bars and restaurants, with tastings kegs and growler fill-ups available at their tasting room located at 4660 Ohio Ave. S. in SoDo, open weekly Tuesday –Thursday from 3-8 pm, Fridays from 3-10pm, Saturdays from 1-10pm and Sundays from 1-6 pm. Select products can also be found in 22-ounce bottles and 12-ounce cans at bars, restaurants and local retailers throughout Washington, Oregon, Alaska and Idaho. For more information, visit www.twobeersbrewery.com.

Lifelong has been a leader in the fight against HIV/AIDS since 1983, when we first passed a soup can around Volunteer Park and collected $42 to help feed, house and stand by those who were fighting this disease. Building on our rich experience of caring for the most vulnerable and marginalized individuals, we are now serving people with a wide diversity of other serious illnesses, especially those disproportionally affected by health disparities. Among our services is Chicken Soup Brigade (CSB), Lifelong’s food and nutrition program. Always delivered with both clinical skill and a warm heart, CSB is the only nonprofit kitchen in the Pacific Northwest that delivers nutritious, balanced, and medically appropriate meals to people living with debilitating conditions, free of charge. 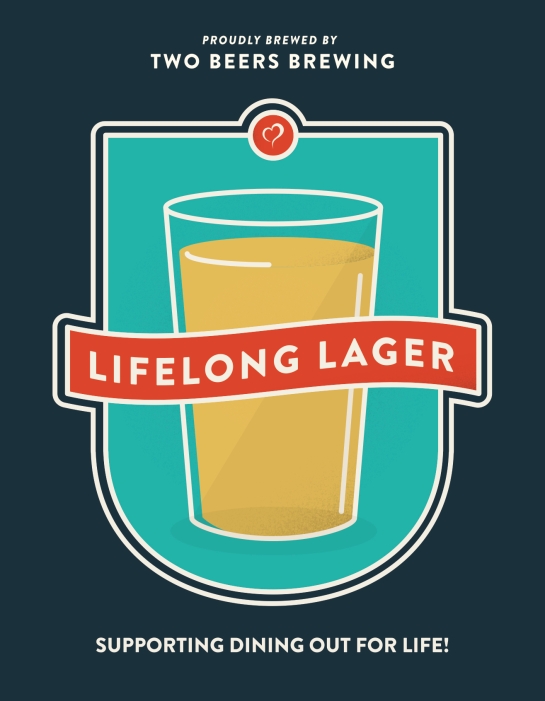 So come out to the preview event next Friday the 22nd, or participate in the Dining Out For Life event on the 28th and help Two Beers Brewing Company and Lifelong provide much needed care to those battling serious illnesses in Washington.