Airways Brewing Company (CBM Sponsor) has been at their location on South 196th Street in Kent since they first opened 6 years ago.  They’ve expanded the taproom since then and added a second location (Airways Brewing Beer & Bistro on West Harrison Street), but their main location has remained the same.  That’s about to change.

For the past few months, Airways Brewing has been working diligently to prepare a new 9,000 square foot space a bit father South on 212th Street, and they’re nearly ready to unveil it to the public.  It’s won’t be ready to open until early to mid Spring, but that won’t stop Airways from celebrating their 6th Anniversary now.

Going on tap today in their current taproom on South 196th and at the Airways Brewing Beer & Bistro location on West Harrison is their 6th Anniversary Mosaic Pilsner.  You can try some on draft or take a few 22 oz bottles to go.

KENT, Wash. (March 10, 2016) – On Thursday, March 10th, Airways Brewing is proud to announce a new, larger brewery and tap room in Kent, as well as the release of its 6th Anniversary Mosaic Pilsner.

“We’re excited to officially unveil our plans to relocate our brewery and tap room to a larger, more visible location in Kent.” said Alex Dittmar, founder and head brewer at Airways Brewing Company. “We considered many options on how and where to grow, but after an exhaustive search, we’re happy to have found a great space in Kent that will allow us to increase our production, as well as provide a better quality experience for our tap room guests.”

Construction on the new, 9,000 square foot space, located on 212th St., has started and is expected to be completed this spring. The new location will replace the original brewery and tap room and will allow for up to a fourfold increase in production, as well as an increase in tap room seating capacity.

In celebration, the 6th Anniversary Mosaic Pilsner is available starting today on draft and in 22 oz. bottles at both Airways locations. Bottles will also start rolling out in the Puget Sound region at select specialty bottle shops and grocery stores. This German-style Pilsner features florally Mosaic hops with flavors and aromas of tropical fruit, citrus, and earthiness, with a wonderfully crisp finish.

“Some people may remember that the Mosaic Pilsner was also last year’s anniversary beer,” said Dittmar. “We liked it so much, and received such an overwhelmingly positive response, that we brought it back. It combines the classic flavors of a German Pilsner with the amazing characteristics of Mosaic, one of my favorite new-age hops.”

In addition to the Mosaic Pilsner, craft beer enthusiasts can pick up the brewery’s flagship Sky Hag IPA and Chocolate Stout in 22-ounce bottles. Pre Flight Pilsner is also available in 16-oz cans. Pints, tasters and growler fills can also be found at the Airways Brewing Tap Room or Airways Brewing Beer & Bistro in downtown Kent.

Airways Brewing has not yet announced the opening date for their new brewery and taproom, but I will let you know as soon as they release the information.  Until then, here are a few photos of the hard work they’ve been up to preparing the new location:

Working On The Drain Trenches At The New Location 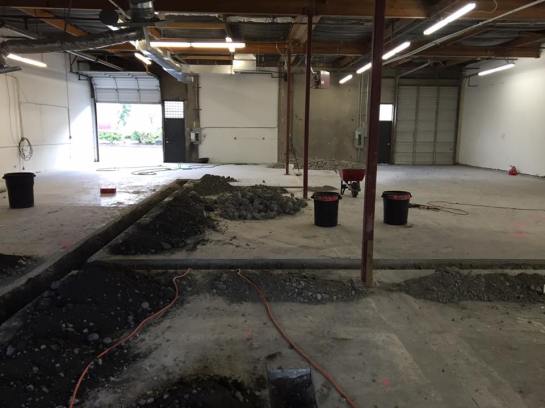 The Bistro opens today at 11 am and the brewery opens at 3 pm.  Swing by to have some Mosaic Pilsner, congratulate them on the new space and wish them a happy 6th Anniversary.