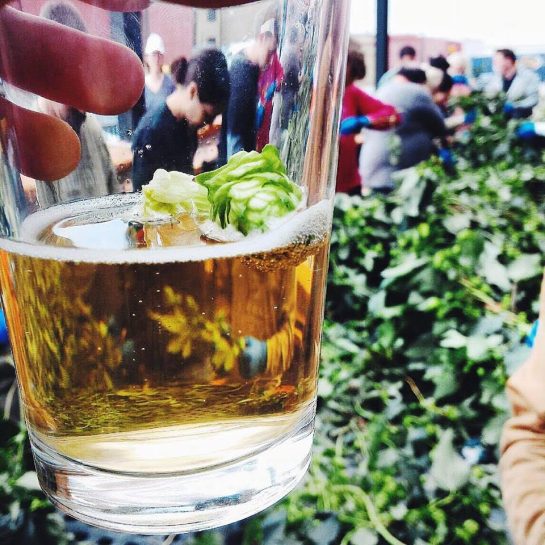 As a serious hophead, I always look forward to the return of Fresh Hop season.  Summer is still here but Fall is just around the corner.  The hop harvest is in, and brewers across the Northwest and across the nation are preparing to brew their Fresh Hop Ales.

Two Beers Brewing Company (CBM Sponsor) always seems to get a bit of jump on the competition in the Fresh Hop category, and this year is no different.  After a one day trip up and back to the Yakima Valley, Two Beers founder Joel VandenBrink arrived at the brewery on the afternoon of August 5th with a truckload of hop vines.  Upon his arrival he was greeted by a crowd of local fans eager to help him pick the hops off the vines for this special annual release.

Joel VandenBrink Getting The Hops From Yakima Valley

This Friday, August 21st, just over two and a half weeks after the hops were picked off the vines, Two Beers is set to release their 2015 Fresh Hop IPA when their doors open at 3 PM.

SEATTLE (August 17, 2015) – Today, Two Beers Brewing announced the release of its most anticipated beer – Fresh Hop IPA – has been scheduled for Friday, August 21 at The Woods tasting room in SoDo. First brewed in 2009, Fresh Hop enters its seventh season on the brewery’s fall lineup. A hyper seasonal, Fresh Hop IPA is know for its intense hop flavor and unique brewing process, which involves a same-day round trip car ride to Yakima, four hours of picking fresh hops off the vine and a 24-hour brewing process. Guaranteeing this is one party you won’t want to miss, August 21 also marks the release of Two Beers Brewing’s popular Pumpkin Spice Ale, as we slowly roll into fall.

“Our fresh hop beer is a true labor of love and we’re proud to release the first fresh hop of the season,” said Joel VandenBrink, founder of Two Beers Brewing Co. “This year, we had more vines than ever before and more than 40 volunteers on the dock ready to help us pick the hops. It’s rare to be able to have your fans be the ones who help create a beer, which is one of the main reasons Fresh Hop is our favorite beer of the season.”

Ringing in at approximately 80 IBUs and 6.2% ABV, the 2015 Fresh Hop IPA’s strong citrus aroma – offering hints of grapefruit and passion fruit – can be attributed to the freshly picked Yakima Valley-grown Centennial hops used to create it. Dark straw in color with light caramel malt tones, 2015 Fresh Hop resembles an aggressively dry-hopped IPA, but packing the punch and flavor only fresh hops can deliver. In addition to Centennial hops, this beer features locally grown Simcoe, Amarillo, Cascade and experimental hops, helping this popular beer achieve its bright and delightfully bitter flavor. Available in 22-ounce bottles and on draft, this beer will only be available for a limited time.

For those already looking toward fall, Pumpkin Spice Ale – offering 19 IBUs and a 5.2% ABV – is bright, clean and spicy, perfect for the season. This small-batch fall seasonal presents clove, cinnamon, allspice and natural pumpkin in a festive and refreshing ale, available August through October in 22 ounce bottles and on draft.

Celebrate the release of these exciting beers on Friday, August 21 at The Woods tasting room in SoDo (4700 Ohio Ave S) from 3-8pm. Pints and tasters will be available, with 22-ounce bottles of Fresh Hop and Pumpkin Spice available for purchase. As a special bonus, sister company Seattle Cider Company will be celebrating the release of its seasonal Pumpkin Spice cider the same day, available on tap and in 22-ounce bottles. Popular food truck Mesob at The Curb will be on site from 4-7pm with delicious food available for purchase.

Fall seasonals will be available on shelves and on tap beginning August 19 throughout Washington, Oregon, Alaska and Idaho. They can also be enjoyed while available at The Woods tasting room in SoDo, shared with Seattle Cider Company, where craft beer and cider lovers can enjoy pints, tasters, packaged products and more six days a week. For more information, follow Two Beers Brewing on Facebook, Twitter and Instagram (@twobeersbrewing), or visit http://www.twobeersbrewery.com.

Joel VandenBrink With Some Hop Vines

About Two Beers Brewing Co. Two Beers Brewing Co. began operations in a small Seattle basement in 2007 and today, produces twelve unique beers including five year-round, seven seasonal and a host of intricate infusions in its 4,800-square-foot SoDo brewery. Two Beers Brewing can be found in Seattle-area bars and restaurants, with tastings kegs and growler fill-ups available at their tasting room located at 4700 Ohio Ave. S. in SoDo, open weekly Tuesday –Friday from 3-9 pm, Saturdays from 1-10pm & Sundays from 1-6pm. Select brews can also be found in 22-ounce bottles and 12-ounce cans through the tasting room, as well as local retailers in Washington, Oregon, Alaska and Idaho. For more information, visit www.twobeersbrewery.com.

In general, fresh hop beers are more intensely aromatic than most other IPAs, which is part of what Fresh Hop Ale fans love so much about them.  I love the citrusy piney aroma that fresh picked Northwest hops add to Fresh Hop Ales which is why, as I mentioned, I always look forward to this particular time of year. 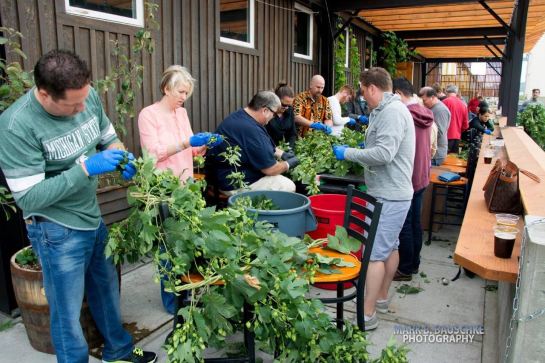 Two Beers’ Fresh Hop IPA is best enjoyed on tap but, as noted above, will also be available in 22 oz bottles.  Just don’t age them!  IPAs and especially Fresh Hop IPAs are meant to be enjoyed fresh and, with just 16 days from vine to tap/bottle, they don’t get much fresher than this. 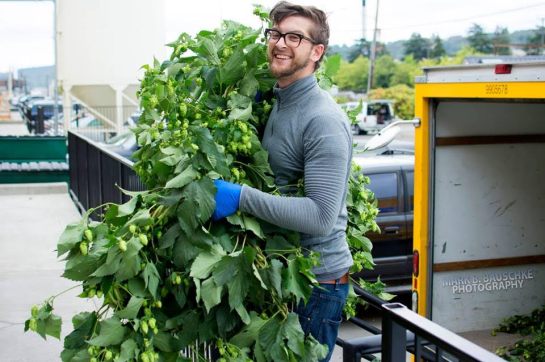