Just in case you haven’t been paying attention to your calendar, Memorial Day is this coming Monday, May 25th.  Regardless of where you stand politically, I think the vast majority of the nation stands behind our brave men and women in uniform.  Craft brewers stand with them as well, which is why Homefront IPA was first created back in 2011.

At the 2015 release event for this beer, you’ll have the opportunity to meet some representatives of Soldiers’ Angels, an organization dedicated to providing aid and comfort to the men and women of the United States Army, Marines, Navy, Air Force, Coast Guard, their families and the growing veteran population.  You’ll also have the chance to meet some representatives from Joint Base Lewis-McChord.  All proceeds from Homefront IPA will benefit Solidiers’ Angels.

Here is some more information about this beer and the release event next Monday from Fremont Brewing Company:

We are hosting a release event for our Homefront IPA on Memorial Day, Monday, May 25th from 11am-3pm. Homefront IPA is a 100% charity beer and was created in 2011 by craft brewers’ desire to honor and support our men and women of the Armed Forces. This year, 10 breweries across the country are brewing Homefront and all proceeds will benefit Soldiers’ Angels. Below are details on the event and our beer, and attached is an 11×17 poster, an instagram graphic, the official press release, and a few pictures from our brew.
EVENT
When: Monday, May 25th, 11am-3pm
Where: Urban Beer Garden (1050 N 34th St, Seattle, WA)
What:
HOMEFRONT IPA
Description: Homefront IPA was created in 2011 by craft brewers with one goal in mind: to honor and support the men and women of America’s armed forces. Homefront is aged on donated Louisville Slugger maple bats, brewed with donated hops from Yakima’s Puterbaugh Farms and donated grain from Cargill, and packaged in donated cans from Crown. Released every year around Memorial Day, 2015’s Homefront IPA team is: 21st Amendment, Center of the Universe, Cigar City, Fremont, Left Hand, Maui, Palmetto, Perennial Artisan, Revolution, and Stone Brewing. All proceeds from the sale of Homefront IPA are donated to military-based charities. For more information on this effort, please visit www.HopsForHeroes.com
ABV: 6.2%
IBU: 65
Down & Dirty: Pilsner and Carafa malts with Chinook and Mosaic hops.
Availability: Limited. For sale at better beer retailers throughout Washington. 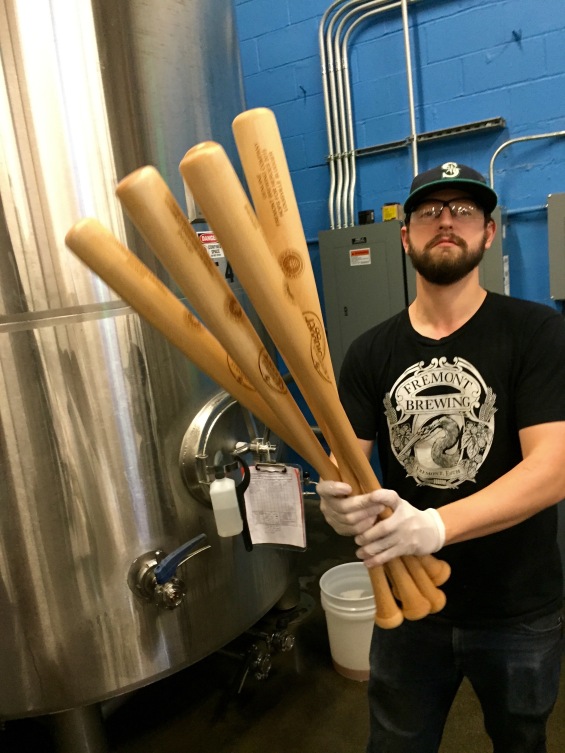 Maple Louisville Sluggers To Go Into The Mash

A beer to honor our armed forced; and it’s aged on Louisville Slugger maple bats?  Count me in.  Come on out to Fremont Brewing on the 25th to try some Homefront IPA and take a few six packs home.  It should also start showing up at most local craft beer retailers around the Sound on the 25th or shortly after.