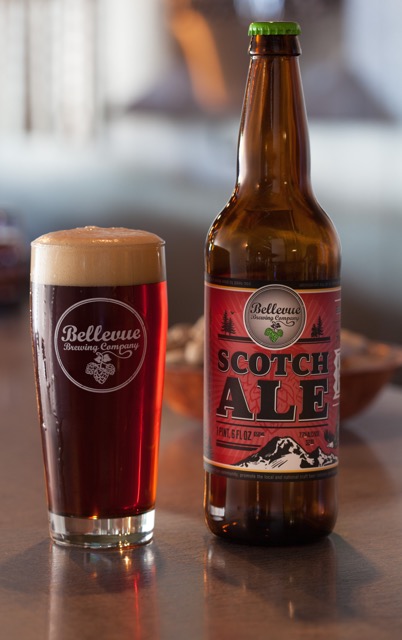 I enjoy a good Wee Heavy Scotch Ale when I can get one.  The rich, malty and slightly smoky/peaty full flavor doesn’t agree with everyone but, when they’re made right, Scotch Ales are quite delicious.  The problem is, not a whole lot of local breweries make a Scotch Ale with any regularity.  One of my favorites from breweries in the Northwest is Fat Scotch from Silver City Brewing Company out on the Olympic peninsula.  It’s especially good when you can get the more rare Fat Woody Scotch (bourbon barrel aged).

Here is some more information from Bellevue Brewing Company:

Some who have enjoyed Bellevue’s Scotch Ale have remarked that it has a great flavor but perhaps a slightly lighter body than other Wee Heavy Scotch Ales.  This could be due to the fact that this bee clocks in at 7.7%, which is a bit lower in ABV than many other Wee Heavy (or Strong) Scotch Ales on the market.  Silver City’s Fat Scotch, for example, comes in at 9.2%.