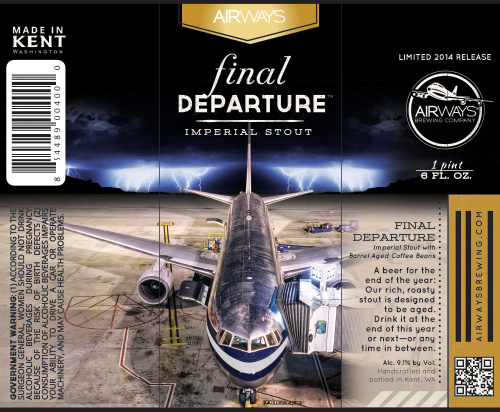 Airways Brewing Company (CBM Sponsor) out of Kent, WA makes a few different styles of Stout.  The two you are probably most familiar with are their Chocolate Stout (rich, roasty and made with cocoa nibs and baker’s chocolate) and Maylani’s Coconut Stout.  You get just one guess as to the special ingredient in that one.

Now, returning for its third year, Airways Brewing is set to bring back Final Departure Imperial Stout.  This year’s version, however, will have a special twist.  It’s been aged on coffee beans from Rad Roasting Company which, in turn, were aged in whiskey barrels from Bainbridge Organic Distiller.

“Our big, beefy imperial stout uses the same basic recipe as in years past, but this year we added a unique twist,” said Alex Dittmar, founder and head brewer at Airways Brewing Company. “We worked with Kent-based Rad Roasting Company a couple months back to age a batch of select coffee beans in whiskey barrels from Bainbridge Organic Distillers. Once those beans had matured, we roasted them, then added them to the conditioning tank. The result is fantastic—amazing, but with soft notes of coffee, whiskey, and chocolate.”

“We first brewed Final Departure in 2012 for the supposed end of the world, according to the Mayan calendar. Last year, as it seemed the apocalyptic threat was behind us, we opted for more celebratory artwork, but it didn’t go over as well. So, this year, this doom and gloom look is back and better than ever.”

The 2014 version of Final Departure Imperial Stout boasts a 9.1 percent ABV and 70 IBUs. As Airways Brewing’s darkest and richest beer, notes of coffee and chocolate give way to a toasty finish accompanied by a firm hop bitterness. This limited edition stout is designed get better with age, so it can be consumed at the end of this year, or next—or anytime in between.