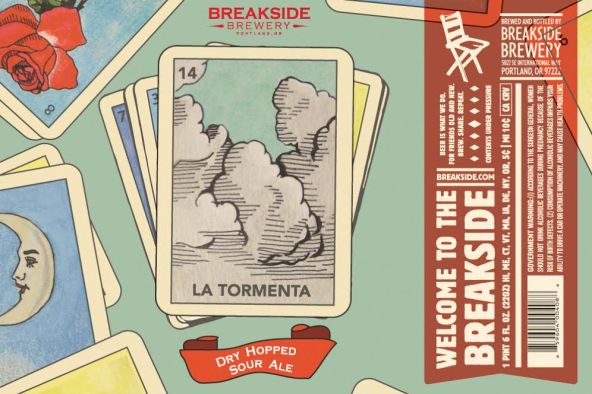 Breakside Brewing Company out of Portland, Oregon makes a wide variety of beers.  I’ve had their Wanderlust IPA many times, but haven’t really explored the rest of their offerings too much.  I’ll have to make sure I visit them the next time I make a trip down to Portland.

Now, with Winter bearing down on us, Breakside felt it was the right time to release their new Winter Seasonal: La Tormenta, a dry-hopped sour ale.  There will be a special release party on December 5th at Bottleworks.

Here is the full press release from Breakside Brewing Company:

FOR IMMEDIATE RELEASE: Breakside Brewery and Brewmaster Ben Edmunds will be in Seattle this Thursday and Friday December 4-5th for the release of the newest winter seasonal a dry-hopped sour called “La Tormenta” and pouring some special barrel-aged beers at Brouwer’s Big Wood fest.

“This dry-hopped sour ale treats the drinker to a sweet, tropical escape. A great gateway to those hesitant to taste their way through the sour beer craze, this light beer combines a subtle tartness with a sweet, citrusy hop blend. The flavors are pronounced, yet subtle, pleasing to any palate without overwhelming.” – Sip Northwest

“wonderful citrusy and fruity notes–lemongrass and passion fruit tinged with white wine grape. The clean lactic tartness frames these flavors, and caramel malts tie them together by adding a hint of sweetness.” – Jeff Alworth, Beervana.com

La Tormenta – dry-hopped Sour Ale:
Our final bottled release for the 2014 brew year is an experimental sour ale made with a unique blend of citrusy, tropical and fruity hops. Bracing-yet-balanced sour notes combine beautifully with West Coast hop flavor in this sweet and tart ale. This beer was one of our most popular small batch offerings earlier in the year, and we’re excited to re-release it as a light and beguiling alternative to classic winter beers. Notes of blueberry, guava, grapefruit, and lemongrass are offset by a juicy acidity, medium body, and a moderate sweetness from caramel malt.

About Breakside Brewery:
Opened in 2010 in the quiet Woodlawn neighborhood of Northeast Portland as a restaurant and nano-sized brewery, Breakside expanded to a 3.5 BBL brewhouse while winning their first medal at the Great American Beer Festival in 2011 where they have earned medals each year since. In late 2013 the brewery expanded operations to Milwaukie, Oregon with a 30BBL production brewery filled with 60 and 120BBL tanks, barrel rooms for wild and non-wild/sour fermentation’s and a 20 tap tasting room. In 2014 Breakside was awarded with the highly coveted Gold Medal for American-style IPA at the Great American Beer Festival for their flagship IPA that was also named to Men’s Journals 100 Best Beers In The World and Sip Northwest’s Best IPA in the Northwest. Breakside is also known for their experimental, barrel-aged and sour beers like Bourbon Barrel-Aged Aztec a strong amber ale with chocolate and chilies that won Bronze at both Chicago’s Festival of Barrel-Aged Beers and Best of Craft Beer Awards and Passionfruit Sour a berliner-weisse style beer that earned a Bronze at the 2013 GABF.

As noted above, Breakside Brewmaster, Ben Edmunds, will also be at Brouwer’s Cafe today and tomorrow for the 2014 Big Wood Beer Festival, with a few special barrel aged beers.  I’ll see you there.