When Joel VandenBrink from Two Beers Brewing Company (CBM Sponsor) decided to launch Seattle Cider Company just over a year ago, he had no inkling of the incredible demand that would follow.  Launching in August 2013, they laid out their sales goals based on expected demand.  Their calculations were way off – in the best way possible.  A mere six months after launching, Seattle Cider Company hit their 5 year sales goal.  That’s right.  They sold the amount of cider they had expected to sell in 5 years time in just six months.  It was clear.  Seattle was cider hungry and very happy to have the first cidery since prohibition back within the city.

Here is the full press release from Seattle Cider Company:

“We’re excited to be launching in Austin and partnering with KEG 1 to bring a new type of cider to the area,” said Joel VandenBrink, founder of Seattle Cider Company. “Our flavorful, small-batch ciders offer limited sweetness and are made using all natural and local ingredients, including fresh pressed Washington apples. We strive to make a truly unique product that everyone can enjoy and hope Austin enjoys it as much as we do.”

Established in August 2013 by Joel VandenBrink, Seattle Cider Co.’s products break the mold of overly sweet cider, bringing the natural flavors of Washington apples to the forefront. Made from a custom blend of local apples and flavorful additions – such as fresh berries, peppers and more – Seattle Cider’s products are handcrafted with all natural ingredients and never made from concentrate. Offering year round ciders available in 16-ounce cans, as well as a selection of seasonal and limited edition ciders in 22-ounce bottles, Seattle Cider Company offers a cider for every palate. Currently, the in-demand, naturally gluten-free ciders are available in Washington, Oregon, Illinois and Alaska.

“Craft ciders such as those offered by Seattle Cider Company are changing the way people think about cider,” said Phil Benvenuto, VP of Sales and Marketing at KEG 1, LLC. “They’re putting out some really innovative things, and we are excited about introducing their ciders to Austin and the surrounding market. Industry predications expect cider to soon claim 3 to 5 percent of overall beer sales in the US and with cider like this, we can see why.”

Upon launch in Austin with KEG 1, Seattle Cider Co. products will be available at select restaurants, bars and retail stores. Available in 16-ounce cans, 22-ounce bottles and on draft, initial Seattle Cider Co. offerings will include:

Dry: One of the driest ciders on the market, the golden glow of the unique cider lends way to notes of lilac, blood orange and green apple on the nose. Pleasantly acidic, flavors of nectarine, under ripe peach and tart cherry hit the palate with no residual sweetness. 0 brix, 6.5% ABV, 16-ounce can.

Semi-Sweet: A light, crisp cider with just a touch of sweetness, this cider is honey in color with notes of bergamot orange, lemon and apple. A refreshing cider, it reveals hints of citrus and cinnamon on the palate. 3 brix, 6.5% ABV, 16-ounce can.

Pumpkin Spice: This semi-sweet cider is copper in color and perfect for cooler weather as the cidery’s fall seasonal. Fermented with pumpkin, cinnamon, nutmeg, allspice, and cloves, it offers hints of the season’s favorite spices followed by just a touch of pumpkin. 3 brix, 6.9% ABV, 22-ounce bottle.

Not your standard cider. Seattle Cider Company is the city’s first cidery since prohibition, bringing true craft cider back to Seattle. Bridging the gap between wine and beer with flavorful, small-batch cider, Seattle Cider’s initial offerings – Dry and Semi-Sweet – break the mold of overly sweet cider, bringing the natural flavors of Washington apples to the forefront. Naturally gluten free and made from a custom blend of fresh pressed, locally grown apples, Seattle Cider’s products are handcrafted with all natural ingredients and never from concentrate, successfully distinguishing themselves from the mass market cider found in stores today. For more information, visit seattlecidercompany.com, or follow Seattle Cider Company on Facebook and Twitter (@seattleciderco).

KEG 1 Central Texas is the proud distributor of many quality beers in the Austin metro area. With a diverse portfolio of brands that includes domestic, import, and numerous local and national craft offerings, KEG 1 strives to be the leader in delivering both quality products and exceptional service to every customer. ‘Like’ KEG 1 on Facebook at Facebook.com/KEG1CentralTexas and follow KEG 1 on Twitter at @KEG1centraltx.

I wasn’t a huge fan of cider just a few years ago.  Like the homogenization of the beer industry before the craft beer revolution, my only experience with ciders were the ones I found in the supermarket aisles – brands like: Woodchuck, Wyders, Spires, etc.  I tried a few, but didn’t see much of a point.  They all tasted pretty much the same to me; like over sweet apple juice.  A few years ago, however, when craft cideries started popping up and offering more enticing choices, I gave cider another try and was pleasantly surprised.

Now, some of my favorite ciders come from Seattle Cider Company; especially their Three Pepper Cider, which is probably my favorite.  I also really enjoy their Washington Heirloom Cider, New England Style Cider (Winter Seasonal) and Pacific Northwest Berry Cider (Summer Seasonal).  Also, of course, don’t forget about their flagship Dry and Semi-Sweet ciders.  They’re great for those who find many other ciders too sweet. 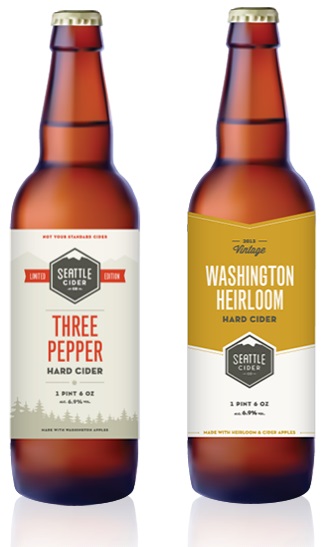 Along with expanding distribution into Texas, the cidery itself is also expanding, thanks to the recent acquisition of more space adjacent to the current space that Two Beers Brewing and Seattle Cider Company occupy.  This will allow them to produce even more cider to meet the ever-increasing demand.  Congratulations to Seattle Cider Company on their continued expansion.