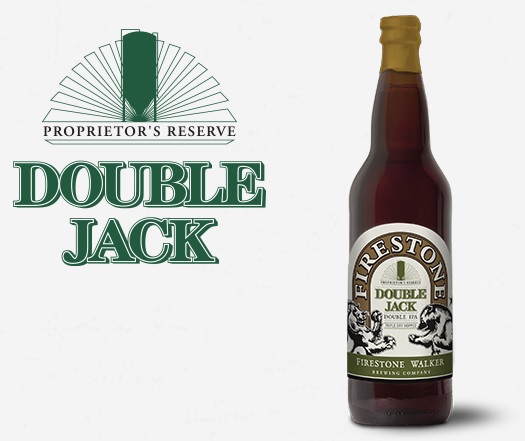 I don’t really have one favorite beer company.  With the incredible plethora of craft beer choices out there it’s impossible for me to pick just one, but I do have several favorites and Firestone Walker Brewing Company is indeed on that list of favorites.  For years now, my favorite IPA has been Firestone Walker’s Double Jack Double IPA.  Brewed with a veritable garden of hops, including: Warrior, Columbus, Cascade and Centennial and dry-hopped with Amarillo and Simcoe, Double Jack is a complex, smooth and incredibly well balanced double IPA.

After first declaring it my favorite a few years ago, I wanted to make sure my choice of Double Jack as my favorite IPA wasn’t a fluke so, over the past couple of years, I have participated in several blind IPA tastings.  Every single time Double Jack was included in one of those tastings, I selected it as my favorite.  So I know my choice is based on Double Jack’s appearance, aroma, flavor and mouth feel, and is not just an arbitrary selection due to my fondness for Firestone Walker and all the other amazing beers they create.

Now, for the third year in a row, Firestone Walker’s Double Jack IPA has earned a Gold Medal at the 2014 Brussels Beer Challenge.  Congratulations!

The Brussels Beer Challenge was first held in 2012, and Double Jack has now earned the gold medal for the “Pale & Amber: Imperial IPA” category in each competition held to date.

In the words of the Brussels Beer Challenge: “During two days, a tasting panel of 60 international renowned beer connoisseurs tasted 730 beers from all over the world. The participating beers were divided into categories based on origin, typicity and style and then evaluated. At the end of the two tasting days, the best beers, in each category, were awarded a gold, silver or bronze award.”

This latest honor for Double Jack is just the tip of the iceberg.  Double Jack has earned several other award as well, including:

That’s an impressive list of awards for any beer, and Double Jack has definitely earned them with its great aroma, satisfying flavor and amazing consistency.  If you’ve never tried Double Jack (I know the average $7.99 price tag per 22 oz bottle can be intimidating to some), I strongly suggest you put your hesitation and your spending limits aside and pick up a bottle.  You won’t regret it.