It’s warming up out there.  In fact, I believe yesterday (4/7) was our warmest day yet this year.  It officially reached 70 at SeaTac and closer to 72/73 in many other places around the Sound (including 78 out in Carnation!)  It’s cooled back down a bit today, but there’s no denying that Spring is here and Summer can’t be far behind.

Our Summers are, unfortunately, rather short in Seattle.  The running half joke heard around town is that Seattle’s Summer starts on July 5th and ends on September 1st.  During that short time, however, we North Westerners really get out there and take advantage of the warmth and sun as much as we can while it lasts.  Airways Brewing Company (CBM Sponsor) wants to help you enjoy your Summer this year with the arrival of PSA Summer Ale, releasing today in 16oz can 4-packs at both Airways Brewing locations and any day in local bottle shops. 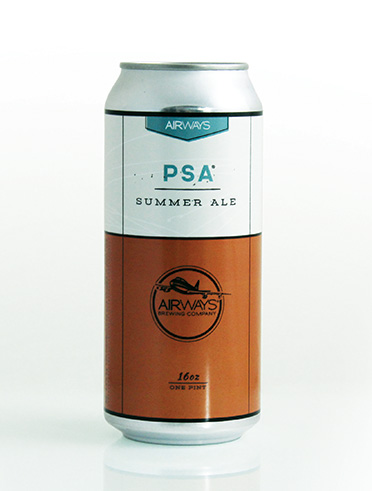 KENT, Wash. (April 8, 2014) – Just in time for when the days get longer and warmer, Airways Brewing Company is releasing PSA Summer Ale. This bright, citrusy pale ale is available from now until the end of September in  4-packs of 16 oz. cans and on draught beginning Tuesday, April 8.

“Our summer ale has a slightly new name, but is the same flavor-packed pale as last year,” said Alex Dittmar, founder and head brewer at Airways Brewing Company. “At 4.8% ABV, it’s the perfect beer to take along with you to a barbecue or on a hike.”

PSA Summer Ale is an easy-drinking beer featuring loads of Cascade and Centennial hops, which give the beer a sweet, citrusy flavor and smell. A touch of flaked oats add a slight creaminess. At 30 IBUs and 4.8 percent ABV, it’s a great beer for the long spring and summer days.

Beginning Tuesday, April 8, PSA Summer Ale will be available in 4-packs of 16 oz. cans at both Airways locations for $10.50. 4-packs will also be available throughout the Puget Sound region at select specialty bottle shops.

For more information about Airways Brewing and its selection of handcrafted brews, be sure to follow Airways Brewing Company on Facebook,Twitter,Instagram, or visit www.airwaysbrewing.com.

Pick up some PSA Summer Ale today and be sure to keep some on hand for those hot Summer days ahead.  At just 4.8% ABV and packed with citrusy Cascade and Centennial hops, it’ll be a real thirst quencher at your next cookout, or after your next run, bike ride or hike.