“Beer in Belgium dates back to the age of the first crusades, long before Belgium became an independent country. Under Catholic church permission, local French and Flemish abbeys brewed and distributed beer as a fund raising method. The relatively low-alcohol beer of that time was preferred as a sanitary option to available drinking water. What are now traditional, artisanal brewing methods evolved, under abbey supervision, during the next seven centuries. The Trappist monasteries that now brew beer in Belgium were occupied in the late 18th century primarily by monks fleeing the French Revolution. However, the first Trappist brewery in Belgium (Westmalle) did not start operation until 10 December 1836, almost 50 years after the Revolution. That beer was exclusively for the monks and is described as “dark and sweet.” The first recorded sale of beer (a brown beer) was on 1 June 1861.”  (*Source)

Today, various Belgian styles are brewed, enjoyed and celebrated across the globe with a number of different festivals across Belgium, and the rest of the World.  Many of today’s Belgian beers pay tribute to traditional, artisanal Belgian brewing methods used for hundreds of years, while others mix tradition with innovation in an attempt to both pay tribute to the past while also moving boldly into the future.  Belgian styles run the gamut, encompassing styles such as the Blonde or Golden Strong, Belgian Pale Ale, Belgian IPA, Dubbel, Tripel, Saison, Trappist and Abbey Ales, Flemish and Lambic Ales, Gueuze and more. 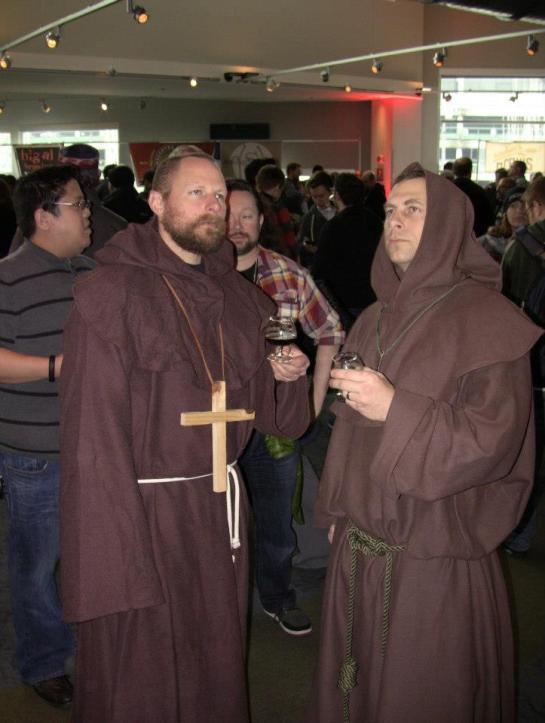 Seattle’s annual celebration of all beers Belgian, Belgianfest 2014, is set for this coming Saturday, February 1st at the Bell Harbor International Conference Center (Pier 66).  Put on by the Washington Beer Commission, this 5th annual Seattle festival is broken up into two different sessions.  The first goes from noon to 4:00 PM, and the second goes from 5:30 PM to 9:30 PM.  Tickets are still available and can be purchased online from Brown Paper Tickets.  The price per session is $35 ($37.22 with BTP Service Fee).  Over 40 different breweries are presenting beers at this year’s Belgianfest, including a few ‘freshman’ breweries such as: Peddler, Populuxe and Stoup.

Here is the full list of participating breweries for this year’s Belgianfest:

You can also look here for a full list of the beers that will be pouring at Belgianfest 2014, with a complete description of each and their table location at the festival.  Last year’s beer list had some interesting and unique choices (See more photos from Belgianfest 2013 here).  A few that still stand out in my mind include:

White and Nerdy:
This Belgian Wit from Justice Brewing had a Northwest twist, with the addition of Citra hops.  This one also won Best of Show at the 2012 Evergreen state fair.

I’m already looking over this year’s list and attempting, in vain, to try and figure out which one(s) I’ll want to try first.  Perhaps Bourbon Barrel La Petite Mort (a very popular selection that Black Raven Brewing has presented at Belgianfest before), or maybe Fluffy Bunnies Farmhouse Session ale from Epic Ales.  Not your speed?  Then how about a straight up Belgian Golden Ale from Lazy Boy Brewing or Belgian Double from Populuxe.  With so many choices, you’re bound to find at least a few you’ll be raving about.  Food at this year’s festival is being supplied by Sweet Iron Waffles, Dante’s Inferno Dogs and Taylor Shellfish Farms.  I’ll see you this Saturday at Pier 66.