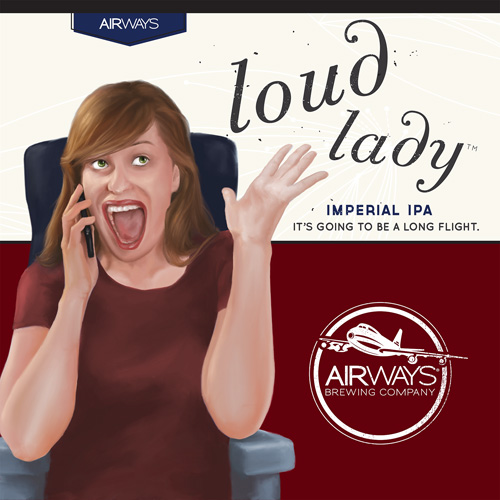 KENT, Wash. (January 21, 2014) – Say hello to Loud Lady Imperial IPA™, the second release of  this limited-edition beer from the Kent-based brewery’s line of delicious handcrafted beers. With a special run just in time for Spring, this delicious, Northwest-style IPA is released only twice a year in small batches.

“We’re happy to welcome the Loud Lady back for its annual January draught release,” said Alex Dittmar, owner and head brewer at Airways Brewing Company. “We last released this beer in June of 2013, and it received an overwhelmingly positive response. So much so, that we constantly get asked when it’s coming back. While this time it’s draught only, it’ll be back in bottles again this summer.”

Loud Lady IPA is brewed with more than 52 pounds of Cascade, Chinook, Centennial, and Simcoe hops added to each 10-barrel batch. Deep gold in color with a strong hop flavor and aroma, Loud Lady is a big beer, but also an easy-drinking one.

The Loud Lady Imperial IPA will be followed by the introduction of the Very Loud Lady™ Triple IPA. Very Loud Lady will be released at both Airways locations on Monday, February 17th and was brewed as part of the Washington Hop Mob Triple IPA Roadshow, with event locations and dates as follows:

In addition to Loud Lady IPA on draught, craft beer enthusiasts can pick up the brewery’s flagship Sky Hag IPA and Chocolate Stout in 22-ounce bottles. Pre Flight Pilsner and Maylani’s Coconut Stout are available in 16-oz cans. Pints, tasters and growlers of all of these beers and more can also be found at the Airways Brewing Tap Room or Airways Brewing Beer & Bistro in historic downtown Kent.

Start preparing your taste buds for an onslaught of serious hop flavor when Very Loud Lady Triple IPA arrives on February 17th at the Airways Brewing Taproom and the Airways Beer & Bistro.  You’ll also, of course, be able to find it at all five events listed above (along with 11 other Triple IPAs from local breweries).  What hophead could resist?