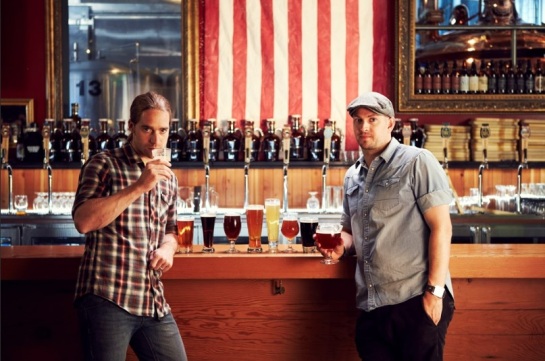 “In 2007, Martin Dickie and James Watt were bored of the industrially brewed lagers and stuffy ales that dominated the UK market, so they decided to brew their own beers. Both only 24 at the time, they leased a building in Aberdeen, Scotland, got some scary bank loans, spent all their money on stainless steel and started making hardcore beers. With innovation at its heart, their BrewDog company developed beers that intentionally destroyed preconceptions of beer drinking and craft beer marketing. Today, BrewDog is one of the fastest-growing companies in the UK, with multiple restaurants and breweries.”

Premiering tonight  on the Esquire Network, join James and Martin for the new series: Brew Dogs (10 PM / 9 Central).  This seven part series follows them as they travel across the U.S. to celebrate distinctive beers and to brew their own unique creations with some of the best brewers in the U.S.  One of their stops (set to air October 15th) will be right here in Seattle, to try and brew the World’s most caffeinated beer in conjunction with Seattle’s own Elysian Brewing.

Here is the full press release from Esquire Network:

James Watt and Martin Dickie are founders of the fastest growing brewery in the UK, makers of the world’s strongest ale, and evangelists of the craft beer movement. These two Scottish rebels are traveling to America with a vital mission: to convert new craft brew fans one beer at a time. Their new original series BREW DOGS premieres Tuesday, September 24 at 10p e/p on Esquire Network.
In each of the seven one-hour BREW DOGS episodes, James and Martin visit a different American beer town, celebrate distinctive craft beers and create their own locally-inspired draft. Along the way, they break every rule in modern brewing, seek out (sometimes bizarre) local ingredients for their brew, and challenge American brewers to help them create the most outrageous beers on earth – all designed to get people thinking about beer in a whole new way.
Episodes include:

The show kicks off tonight in San Diego, where James and Martin will team up with Stone Brewing Company to create a beer using ingredients they harvested themselves, including kelp and the World’s hottest chili, and brew it while traveling on a train at 70 MPH.  What a ride.  Keep watching for a different craft beer adventure each episode.

Seattle (October 15, 10p e/p) — In the world’s most-caffeinated city, James and Martin set out to brew the most caffeinated beer in the world: a big, bold, chocolate-coffee imperial stout. Using the most highly caffeinated coffee beans – custom roasted with Victrola – they blend them with Theo’s chocolate and an extra dose of specially extracted caffeine. After brewing the beer while sailing on the top deck of the Bainbridge Island Ferry, they serve it alongside some tasty beer chocolates at a party at Elyisan Brewing’s Capitol Hill brewery.

So be sure to tune in each week and follow the Brew Dogs as they make their way across America, one brew at a time.  You can get an extended first look HERE.  Also, be sure to also follow Brew Dogs on Facebook and Twitter.