Like most young Americans, my early experiences with beer back in the early to mid 80’s included choices like Budweiser, Michelob, Coors and other, similar, mass-produced American lagers.  In the ignorance of my youth, and with the complicity of my father who kept his fridge stocked with beers like Coors, MGD and *shudder* Meister Brau,  I thought, sadly, that these were the very best beers American brewers had to offer.

It wasn’t until a few years later, when I started buying my own beer (rather than raiding my father’s fridge), that I began to discover craft beer and started drinking beer from some of Northern California’s early craft brewing pioneers like Sierra Nevada, Mendocino Brewing, Anderson Valley Brewing, North Coast Brewing, Marin Brewing and others. (Sadly, I recently learned that Mendocino Brewing is no longer a craft brewery.  They are now over 70% owned by United Brewery Holdings, the Indian conglomerate Kingfisher beer.)

To my recollection, the very first craft beer I ever had (back in the mid to late 80’s) was a Red Tail Ale from Mendocino Brewing Company.  A mildly hoppy Amber Ale, it was the first time I’d tasted a beer besides a mass-produced American Lager.  It was also, I believe, the first Ale I’d ever had.  I was struck immediately by its full flavor and slightly hoppy character – something I had never tasted before in any beer I’d had previously – and was hooked instantly.  After experimenting a bit more with a few of the other craft beer choices that began appearing in my local markets, I started to discover that there was so much more to the World of beer than just the bland, pale, mass-produced lagers I’d been introduced to so far.  Pale Ale, IPA, Ambers, Porters, Stouts, Brown Ales and other styles started to make my head spin with all the choices, but I was determined to explore them all and start getting away from drinking the watery and near flavorless swill that could still be found in my Dad’s fridge. 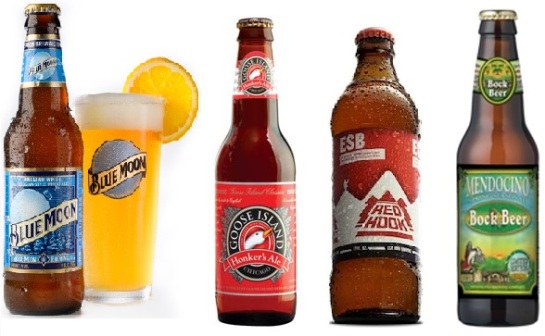 Think You’re Drinking Craft Beer When You Reach For One Of These? Think Again!

It’s been almost 25 years since I had that Red Tail Ale and experienced my craft beer epiphany but it recently struck me that I will, at times and usually without realizing it, still wind up drinking a beer that comes from one of the ‘big boys’ of brewing (most notably, AB/InBev and SAB Miller/Coors).  These huge, multinational corporations own far more than just the core brands of Bud, Miller, Coors, etc. that you’re used to seeing.  After years and years of consolidation and buy-outs, it can be a challenge in most supermarkets today to find a beer to buy that hasn’t come from one of these beer giants.  Here are just a few of the many, many beer brands out there that masquerade as Craft, but are really owned (in full or in part) by AB/InBev or SAB Miller/Coors:

I always do my best to make sure I don’t buy any of these brands of beers or any beers that are owned by the ‘big boys’.  Other than when I’m drinking a excellent imported beer (preferably one that is also not owned fully or in part by AB/InBev or SAB Miller/Coors), I would much rather spend my hard earned money on American beers brewed by true, independent craft brewers, and I think you should too.  To that end, I decided it was time to formally declare my allegiance to craft beer by creating and taking The Craft Beer Only Pledge.  I urge you all to take this pledge as well and declare your loyalty to craft beer.

The Craft Beer Only Pledge:

As a responsible beer drinker who wants to support only craft beer and never the big brewery conglomerates/corporations, I hereby by pledge that:

What exactly is a ‘Craft Brewery’?  Currently, a ‘Craft Brewery’ is defined by the American Brewer’s Association as: “small, independent and traditional”, and gives a production size of less than 6,000,000 US beer barrels (700,000,000 L) a year and can not be more than 24% owned by another alcoholic beverage company that is not itself a craft brewery (This means Goose Island, Kona and other breweries like them are no longer craft breweries due to ownership by SAB Miller/Coors or AB/InBev).  You may need to do a bit of research to determine if the beer/brewery you’re looking at is truly craft or not.

It was recently brought to my attention that there are still a few independently owned breweries out there who don’t fit into the American Brewer’s Association of what qualifies as a ‘Craft Brewery’ – but only because of their size.  For example: Straub, Schell & Yeungling are all still independently owned, but each produces more than 6 Million barrels per year (the ABA ‘cutoff’ for being classified as a ‘Craft Brewery’).

I am fine with supporting these breweries as part of the Craft Beer Only Pledge.

So, how about it?  Are you ready to take The Craft Beer Only Pledge to drink only delicious craft beer and never the swill that comes from mass-produced, corporate owned/controlled breweries?  Don’t get me wrong here.  A few of the former craft breweries that are now part owned/controlled by the big brewery corporations (and therefore no longer quality as ‘craft breweries’) still make good beer but, due to their ownership status, I would prefer to not to give them any of my money.  I would rather it all go to only independent craft breweries.

I urge you all to take The Craft Beer Only Pledge today and to please share this article with your friends and family, so they too can help support the ever growing craft beer industry.  Let’s show the ‘big boys’ that their fancy packaging (Bow Tie Budweiser can or Heineken ‘Star’ bottle anyone?) and other marketing gimmicks will no longer blind us to the inferiority of their products.  Give your taste buds what they deserve.  Give them craft beer and ONLY craft beer.