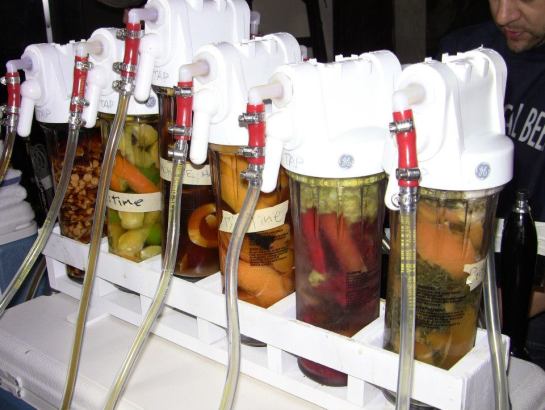 Can You Handle These Randalls?

Seattle Beer Week 2013 is over; some might say thankfully so, since Beer Week can often really do a number on your liver, your sleep patterns, etc., but I’m a bit sad to see it go until next year.  I think I’m nearly done recuperating from Seattle Beer Week 2013, but I wanted to update you on some of the other events I attended throughout the rest of the week.  I attended several different events since my ‘Seattle Beer Week So Far’ article and I will fill you in on them all, in order.  Let me start off by detailing one of my favorite events, due to the unique nature of the combinations to be found: ‘Can You Handle My Randall’ at The Pine Box.

Last Monday, May 13th, The Pine Box setup 12 different Randalls out on their covered patio, each pouring a different beer with a different Randall infusion.  Some were fairly tame, while others were pretty off the wall.  Depending on what beers are used and what Randall ingredients are selected, Randallized beers can be a very unique experience; usually pleasant, sometimes surprising, but always different.  Here was the beer/Randall lineup for the day and my impressions of each:

This is a new beer from Airways Brewing and my first time trying it was through the Randall, so I had no way to compare it to what the beer would ordinarily taste like.  However, the orange peel and lemongrass infusion gave this ESB a decidedly ‘tea-like’ taste to it – a bit dry on the palate, but pleasant to drink on a warm day.  I have yet to try the unadulterated version of this beer, but hope to soon.

Big Time Brewing‘s Meerkat on a Randall of Grapefruit:

Meerkat is a beer I’m familiar with, since I’m somewhat of a regular at Big Time (I work just 2 blocks away).  It’s a nicely hoppy IPA with pleasant citrus notes.  I expected the grapefruit to ‘accompany’ those citrus notes and perhaps amplify them a bit, but what I got was something that was more grapefruit that anything else – it overpowered the other flavors in the IPA a bit too much at first.  I had one of the first pours off the Big Time Randall, so that may have been the reason for the over-abundance of grapefruit aroma and flavor.  I did have the opportunity to try a sip of this one again a few hours later and the assertiveness of the grapefruit had subsided a bit, but was still the dominant flavor imparted to this particular selection.

Elysian Brewing‘s Superfuzz on a Randall of Pineapple:

If you aren’t familiar with Superfuzz, it’s a new Pale Ale from Elysian, made with Blood Oranges, giving it a unique citrus character.  The addition of pineapple in the Randall was a subtle but pleasant addition that complimented the existing flavors in the beer well without overpowering them.  This wound up being my second favorite Randall of the day.

Fremont Brewing‘s Universale Pale Ale on a Randall of Mango:

Fremont’s Universale Pale is a nice, flavorful pale with just the right amount of hops (for a Northwest Pale).  The mango Randall on this one was a subtle but pleasant addition.  Another combination that was more complimentary than distracting to the existing flavor of the base beer.

Yes, you read that right – Skittles.  While a bit of the beer’s original hop character, along with the Simcoe and Cascade in the Randall did come through a bit, the predominant flavor in this one, as you might expect, was the Skittles.  For lack of any better term to use, I wound up describing this as something that tasted like a ‘Kid’s Beer’.  Not that kids should be drinking beer, of course, but this was like beer candy.  Believe it or not, the Skittles flavor was not so overpowering as to make the beer sickly sweet or unpleasant to drink; but it certainly was a unique experience.

If you haven’t bee to Machine House Brewery down on Airport Way yet, then you have yet to experience the ‘true cask experience’ they have to offer.  All of Machine House’s beers are served on Cask and are pretty much all ‘Session’ beers.  That is, they are a bit lower in alcohol, but big on flavor.  Their ESB was a good backbone to start with for this aggressive Randall.  The Cardamom was the predominant flavor imparted, but the bay leaves were also easily detectable.  The coconut was a bit muted under the other flavors and only came though slightly for me in the aftertaste.  This is not a beer/Randall combo I’d sit and drink pint after pint of, but it was quite distinct.

Maritime Pacific Brewing‘s Old Seattle Lager on a Randall of Lemon and Lime:

If you’ve ever squeezed a bit of lemon or lime into a light Pilsner on a hot day, or if you’ve ever had a ‘Shandy’ (also known as a ‘Radler’), then you’ll have some idea of what to expect from this combination.  The light Lager paired up with the Lemon and Lime was refreshing; almost like a Pilsner lemonade.  A very pleasant combination.

Port Townsend’s Golden Ale uses mostly Pilsner malt, making it a very light ale and, other than a bit of hop character, somewhat of a blank canvass for the Randall to act on.  That’s pretty much what happened here.  Drinking this beer, all I tasted was the green tea.  This might make a great Sumer combination for any Green Tea lovers out there.  I suspect it would work well with most Golden Ales or light Lagers.

The beer listed on the sheet for this one was ‘Full Fat’, but Silver City has no such beer and I’m quite familiar with their Fat Scotch Ale.  So I’m confident that was the base beer for this unique Randall infusion.  While the flavors of both the Maple Bacon and the Peanut Butter Chips came through, neither were overpowering.  It made for a rich, almost desert-like sensation that was actually very drinkable.  This was actually my third favorite of the day.

This was a new Raspberry Sour Ale from Schooner Exact, and the selection of more Raspberries along with Rhubarb and the distinct Hallertauer Hops made for a pleasant accompaniment.  The sour qualities of the base beer were diluted more towards the sweet and rhubarb was an unusual choice, but complimented the sour raspberry quite nicely.

Skagit River Brewing‘s Cold Beer Pilsner on a Randall of Cilantro and Lime:

I’ve never been much of a fan of beers with Chile peppers in them, although I have found the occasional combination that was quite pleasant (including a few Chocolate/Chile beers).  That’s why I surprised even myself when I took my first sip of this one, laughed and said, “It needs some Jalapeño!”  Both the Cilantro and Lime flavors from the Randall came through nicely, but left this lager tasting a bit ‘flat’.  I felt like the addition of jalapeño along with the Cilantro and Lime would have made this one the perfect accompaniment for some great tacos.

That’s quite an ingredient list for the Randall there, wouldn’t you say?  This one contained more ingredients than any other Randall there that day, and I’ll be darned if this wasn’t, by far, my favorite selection of the day.  The base beer, Monk’s Indiscretion, a hoppy Belgian style Pale, is already fairly distinctive with it’s intense hop character and high alcohol content (10%).  The Randall additions just sent things over the top, with no one Randall flavor overpowering the other or the beer itself.  It created a truly unique flavor and aroma that are difficult to describe.  This one had to be experienced to be appreciated.  And I certainly did appreciate it.

If you’ve never been to one of the Pine Box’s Randall events before, I urge to you keep an eye on their events calendar and let a bit of your adventurous side out the next time you see one come around.  If you don’t want to wait for an event and just want to experience how a Randall can alter the flavor of a beer, head on by The Pine Box anytime, as they always have one beer pouring through their permanent Randall installed behind the bar.  Most of the time, they also have the same Randall beer pouring off the Randall, allowing you to experience the same beer both ways: on the Randall and by itself.  This is the best way to detect what types of aromas and flavors different Randall ingredients can have on different beers.

My next article, coming soon, will detail the Beer and Burger Battle, which took place last Tuesday, 5/14 at Brouwer’s Cafe.

3 thoughts on “Can You Handle My Randall Recap”