Immigration is a subject that’s come up a lot lately.  There’s debate over immigration laws, how to handle illegal immigrants, and even how much scrutiny should be given to those who emigrate to the U.S. legally.  Well, American Brewing Company (Craft Beer Monger sponsor) is doing their part for at least one talented and ambitious immigrant with tomorrow’s release of Fed White and Brew ESB.

You might recognize the name Simon Majumdar from the Food Network.  He’s been on several episodes of Iron Chef America, Extreme Chef, Best Thing I Ever Ate and has been a recurring judge for the past three seasons of The Next Iron Chef.  After a mid-life crisis at 40, Simon decided he’d had enough of the daily grind of the publishing World and set out on a journey to “Go Everywhere, Eat Everything”.  After traveling the World and publishing two popular books (“Eat My Globe” and “Eating For Britain”), Simon is now working on his next project: “Fed White & Brew”, and part of that project involved collaborating with American Brewing Company to create a new beer called Fed White & Brew ESB.

In 2007, I made the phrase “Go Everywhere, Eat Everything” the mantra of my life, and in 2013 as my new journey begins, I am going to use food and the people who produce, make, sell and eat it the tool I use to discover what it means to become a citizen of this remarkable country.

I am already a huge fan of eating across America and, for the record I have already enjoyed meals in 48 of the 50 states (with Delaware and Alaska being the only ones to have escaped my attention thus far). But, this time it is going to be different.

This time, I want YOU to help me discover America by inviting me to be part of your food experiences. 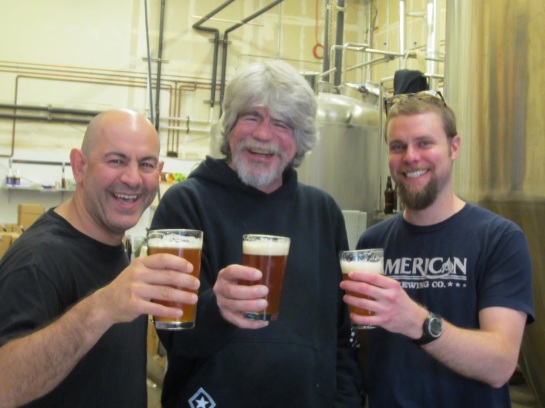 So head on out to American Brewing Company tomorrow, Wednesday April 24th, have a pint of Fed White & Brew ESB and see if Simon’s got what it takes.  If you get hungry, American Brewing’s ‘Big Mike’ will be on the grill, stocking up a hot dog buffet with plenty of toppings to choose from.