It’s been a busy weekend for craft beer lovers in Seattle.  Three new breweries opened this weekend: Peddler & Populuxe on Friday and Machine House on Saturday. Also on Saturday, Airways Brewing held their 3rd anniversary celebration along with the release of their first beers in cans.  Hitting all four events took a bit of planning, but it was well worth the effort.

First up was Peddler Brewing.  Located on NW Leary Way just one block from Hilliard’s and two blocks from Northwest Peaks, Peddler’s founders Haley Woods and David Keller have done a great job revamping the space originally occupied by Maritime Pacific and they had it well stocked with eight different beers to chose from on opening day, including:

I was tempted to order a sampler tray of all 8 beers, which was a popular choice to the point where Peddler started running low on taster glasses and trays, but I knew I had other stops to make so I just opted for their tasty Caramel ESB.  I almost selected their IPA, but I know I often get stuck in an IPA rut so I’m trying to branch out a bit more.  Also, while I didn’t have a chance to try it myself, I was hearing good things about their Coffee Saison.  Peddler currently offers no food, but you are welcome to bring in any outside food. 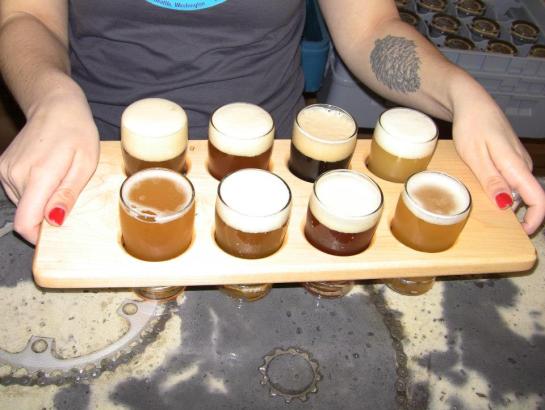 The bartop at Peddler is unique. It’s concrete with bicycle gears and chains embedded in it, leaving now doubt Peddler is all about the bicycles.  They also have a large bicycle rack and even a small work space where you can fix a flat or perform other minor maintenance while you’re there. 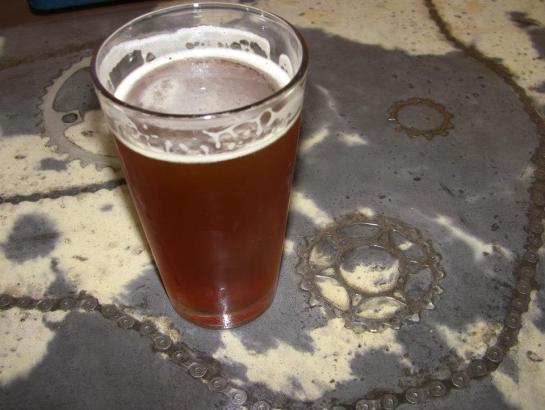 Word about their opening had obviously spread, and Peddler was packed with a line out the door within just a few minutes of opening their doors.  You would think, with Ballard becoming so crowded with breweries, that finding customers would be a challenge. That didn’t seem to be the case here.  At least for now, Ballard’s booming craft beer scene shows no signs of slowing down.

Peddler Brewing’s current hours are Friday’s from 5PM-10PM and Saturdays from 4PM-10PM, but they plan to slowly increase the hours/days they are open.  Click here to see more photos from Peddler’s grand opening.

My next stop was at Populuxe Brewing.  About 5 blocks away from Peddler Brewing, on NW 49th Street, they seemed to be even more packed than Peddler.  However, that may have been party due to the fact that Populuxe’s taproom is a good deal smaller than Peddler’s.

Offering three beers on tap for the opening, I heard that their ‘Cinderblock CDA’ was quite popular.  It certainly must have been, because they were out of it by the time I reached the bar to place my order. The choices available when I arrived were:

This time I went with the IPA, which had a nice, citrusy hop character. I was getting a bit hungry at this point, and I needed a beer that would stand up to the spiciness of the tacos I was preparing to order from Contigo Modern Mexican – the food truck Populuxe had on hand for the opening. 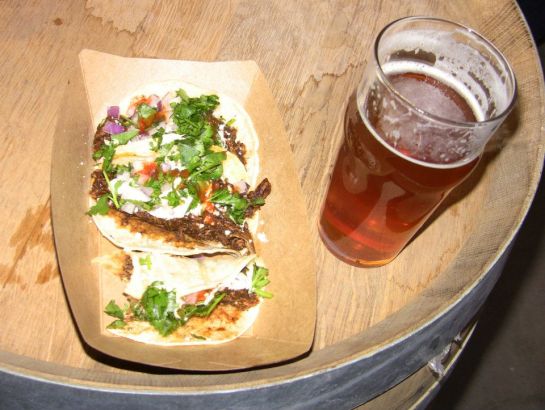 My Populuxe IPA And Chicken Mole Tacos From Contigo

Populuxe has done a good job with the space they have, but the extremely crowded opening made it clear that a bigger taproom is always better.  We were fortunate to have good weather on this day so the overflow could be out back by the food truck.  On a rainy day, however, I could see the Populuxe taproom getting a bit over-crowded on a busy Friday or Saturday night.  Having Contigo there was a smart choice too, as Populuxe currently offers no food of their own.

Populuxe Brewing’s current hours are 5PM-10PM, Thursday through Saturday.  You can click here to see a few more photos from Populuxe’s grand opening.

The next morning, it was time to head for Seattle’s Georgetown neighborhood and the grand opening for Machine House Brewery.  Machine House, which is located in one of the old Rainier Brewery buildings on Airport Way, specializes in small batch, English style Ales, and all of their beers are served on cask.  It was started by co-founders Bill Arnott and Alex Brenner to bring the ‘true cask experience’ to the Seattle beer scene. 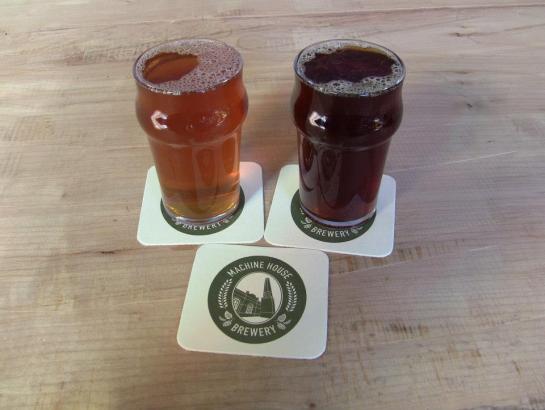 Machine House Ginger Ale And ‘You Name It’ Ale

The beers from Machine House are also session ales, meaning they won’t over-power you with alcohol.  According to Machine House Brewery:

True session beer ranges between 3.6% and 4.8% alcohol by volume while providing the aromatic and rich flavors Northwest beer drinkers have come to expect and appreciate. However, because of the lower alcohol content you can continue to enjoy the conversation late into the evening and not sacrifice the following morning.

I can certainly appreciate this approach.  While I’m a big fan of IPA and especially Imperial IPA, the high alcohol content in many of them means I can only have a few before I have to cut myself off.  So, I’m really coming to appreciate lower alcohol beers with full-bodied flavors and, on that front, Machine House definitely delivers.

The three ‘standard’ beers for Machine House include:

They also had two more beers on hand for the grand opening: a Ginger Ale and a ‘You Name It’ Ale (it had no name and Bill was taking suggestions).  Both were quite tasty and great examples of English cask ales.

Machine House Brewery, like Peddler and Populuxe, currently offers no food of their own, but there are a few food options nearby.  Right across the street you’ll find Jules Mae’s Saloon, Fonda La Catrina and Hallava Falafel.  Also just across the street is the specialty beer and wine shop, Full Throttle Bottles.  So, the next time you head there to pick up some beers, you’ll have a great excuse to check out Machine House.

The current hours for Machine House Brewery are noon-6PM on Saturdays and Sundays.  You can click here to see some more photos from their grand opening celebration.

After enjoying a few tasty English Ales at Machine House, it was time to head South to Kent and the 3rd anniversary celebration for Airways Brewing Company.  It was also the debut of their first canned beers: Oatmeal PSA, and Pre-Flight Pilsner, as well as a special 3rd anniversary Belgian Dark Strong ale.

Info About The New Canned Beers From Airways Brewing:

Available in four-packs of 16-ounce cans and on draught, the Oatmeal PSA (Pale Session Ale) and Pre-flight Pilsner will become the newest additions to Airways Brewing’s year round lineup. The Oatmeal PSA is a unique, full flavored beer, featuring 5.0 percent ABV and 35 IBUs. Brewed with flaked oats for a creamy sweetness, this sessionable beer is balanced, offering a slight bite thanks to citrusy Northwest-grown Cascade, Centennial and Magnum hops. The Pre-Flight Pilsner is a pre-prohibition style pilsner, fuller in body with a distinct, spicy hop presence, attributed to the Hallertauer and Saaz hops used to brew it. Offering 5.0 percent ABV and 30 IBUs, it’s perfect for the next time you’re assigned that middle seat on a cross-country red-eye.

The anniversary celebration officially kicked off at the brewery at 2PM.  However, members of Airways Brewing’s Mile High Mug Club were able to start enjoying the festivities at 1PM – one of the benefits of a mug club membership.  Airways also closed the Airways Brewing Beer & Bistro for the day, so that their whole crew could be on hand at the brewery for the anniversary celebration.

In addition to their regular lineup and the 3rd anniversary Belgian Dark Strong (which was very tasty, if a bit lighter in color than other Belgian Dark Strong ales I’ve had), Airways also had a special cask of double-dry-hopped Sky Hag IPA on hand to enjoy.  Also, since this celebration was happening at the brewery rather than the Bistro, Airways Brewing brought in Lumpia World to supply food for the event.

Also brewed just for the occasion is Airways Brewing’s Third Anniversary Belgian Dark Strong. Featuring 9.9 percent ABV and 26 IBUs, this complex, yet smooth beer is filled with rich, dark fruit flavors, paired with notes of fruit and spice on the nose. Brewed with Hallertauer hops, this limited edition beer will be available for purchase only in 22-ounce bottles at the anniversary party and specialty beer shops shortly thereafter.

Everyone seemed to be having a great time at the celebration, and the weather for it was just perfect.  Airways Brewing couldn’t have asked for a better day to mark their 3rd anniversary.  After a few hours catching up with many friends and acquaintances in attendance for the event, I made my way home with a growler of Airways Brewing’s Berliner Weisse, which I’ll enjoy today as I relax and recover from a couple of truly fun-filled days.

Airways Brewing & the Bistro are closed on Sundays, so they’ll have a chance to recover as well, but both will be back open for business as usual next week.  The Bistro is open Monday through Thursday from noon-9PM, and Fridays and Saturdays from noon-10PM.  The Brewery and taproom is open Wednesday through Friday from 3PM-8PM, and Saturdays from 3PM-7PM.  You can click here to see more photos from Airways Brewing’s 3rd anniversary celebration.