Pour, Pour, Pour – The Beers
(Sung to the tune of Turn, Turn, Turn by The Byrds)

Right now it’s Winter beer season.  And I couldn’t be happier with this year’s lineup of great Winter beers.  There is just so much wonderfully dark, rich, woody, bourbony, delicious goodness out there with the likes of Hoppy Holidays & Hoppy The Woodsman (Schooner Exact Brewing), Winter Bock (Silver City Brewing), Creepy Monkey Bourbon Barrel-Aged Brown (North Sound Brewing), The Abyss (Deschutes Brewing), Bindlestiff (Naked City Brewing), Jolly Roger Christmas Ale (Maritime Pacific Brewing), Bifrost Ale (Elysian Brewing), Bourbon Barrel Abominable Ale (Fremont Brewing) and many, many more.  For anyone who is a fan of these darker, often barrel-aged, complex and delicious Winter delights, this is a great time of year to be a beer drinker.

Barleywines are also quite popular this time of year, and two of Seattle’s most exciting Barleywine festivals are coming up.  First up, kicking off this year on Saturday, February 23rd, is the 11th Annual Barleywine Bacchanal at Beveridge Place Pub. Beveridge Place consistently earns it’s rightful place on best craft beer bar lists, including Draft Magazine’s list of 100 Best Beer Bars in America.  It’s a great place to relax with some friends and enjoy some World class beers.  My experience at least year’s festival was quite enjoyable.  A few of my favorites from last year’s list included:

Just a reminder that there is no kitchen at Beveridge Place Pub, but any outside food is welcome.  I recommend you bring something along to snack on, as Barleywines are quite strong, and you certainly don’t want to have too many on an empty stomach.  Some popular nearby choices include Zeek’s Pizza and Kokora’s Greek Grill, both of which will deliver to you right in the pub.  There’s also a Subway sandwich shop just a block down California St. 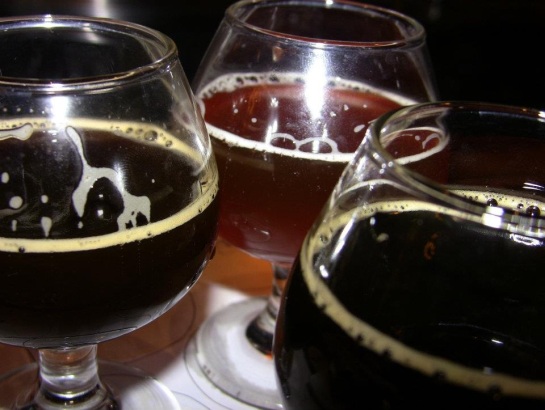 Next up, kicking off exactly one month after the Barleywine Bacchanal at Beveridge Place, is the 11th Annual Hard Liver Barleywine Festival at Brouwer’s Cafe which starts this year on Saturday, March 23rd.  Last year’s festival had over 57 different Barleywines to enjoy, plus some special menu choices.  Last year was my first opportunity to participate as a judge for the Hard Liver festival, and I hope to enjoy that same privilege this year.  The winners from last year’s festival, according to the pre-event judging, were:

Now, how can you argue with such a list?  Lost Abbey Angel’s Share is quite popular, and deservedly so; and you saw my thoughts above in my tasting notes from the Barleywine Bacchanal what I thought of Firestone Walker Abacus ’11 and Black Raven Old Birdbrain ’10.  A few of my other favorites from last year’s fest included:

This festival is always enjoyable and always crowded.  You can bet on their being a line outside Brouwer’s when the doors open at 11:00AM on March 23rd.  I will definitely see you there.  It’s too early for there to be a tap list available for either Barleywine festival yet, but I’ll keep you posted when those lists become available.

The Awesome Sliders At Cooper’s Alehouse

We still have nearly a month to wait before the Barleywine Bacchanal and nearly two months for Hard Liver.  Of course, that doesn’t mean we can’t already be looking even further ahead to the next season of craft beer, and that means hops.  Starting on Friday, April 5th this year (and running until the 26th), will be the 11th Annual IPA Festival at Cooper’s Alehouse.  This festival spans several days and includes over 60 different IPAs divided into different categories.  Some of last year’s categories included:

One really enjoyable aspect of Cooper’s IPA Fest is the fact that each IPA lineup can be done as a blind tasting.  Think you can pick out your favorite Washington or Oregon IPA or Double IPA from the rest without knowing which is which?  Put your senses of sight, smell and taste to the test.  You can order a ‘blind’ taster tray of four different IPAs from each category and vote on them without knowing which is which.  Then, each time one of the beers in a category blows, Cooper’s reveals the taps.  Every couple of days (or perhaps even every day, depending on how quickly the kegs kick) Cooper’s will setup a new blind tasting for the next category.  This is really fun way to do tastings, and you might surprise yourself by picking an IPA as your favorite that you didn’t expect.

Cooper’s also has some pretty great food as well, with items like the Peanut Butter Bacon Burger, Habanero Wings and Beer Battered Fish & Chips.  I also highly recommend their sliders, which come with lettuce, tomato, pickles, onions and cheese.

Also, don’t bee too discouraged that Russian River Brewing has ceased distribution to Washington.  Pliny the Elder was not picked by most as their favorite from the ‘California Dreamin’ Double IPA category.  In fact, it was beaten out by Sierra Nevada Hoptimum, Firestone Walker Double Jack and Green Flash Palate Wrecker in the blind taste judging – all of which are readily available here in Washington.

One Of My Taster Trays From The 2012 Barleywine Bacchanal

April is also known around here as IPApril over at Beveridge Place Pub.  All April long, Beveridge Place will feature a plethora of different IPAs on their 35 taps.  Also, similar to Cooper’s, Beveridge Place offers blind taster trays on one day of the festival.  Last year, I was there for the blind tasting and got a tray of 8.  My notes for those 8 were:

And when the taps were revealed the next day, they were:

And the winners from last year’s festival were:
1st: Black Raven Wisdom Seeker (E) – This was my first choice.
2nd: Russian River Pliny The Elder (B) – This was my fourth choice.
3rd: Avery Maharaja (A) – This was my 7th choice!  Very surprising.  I didn’t realize it was so malty.

The Menu From Hard Liver X

So, do you have a favorite beer season?  With so many great beers and great events to choose from, it can be difficult to pick just one season as your favorite.  Luckily, you don’t have to pick.  Enjoy them all.  And don’t forget about Belgianfest, put on by the Washington Beer Commission, coming up this coming Saturday, February 2nd, and the annual Chocofest happening Ferbuary 10th at Pike Brewing.  I plan to try and hit up every one of these events.  I hope you can make it to at least a few.